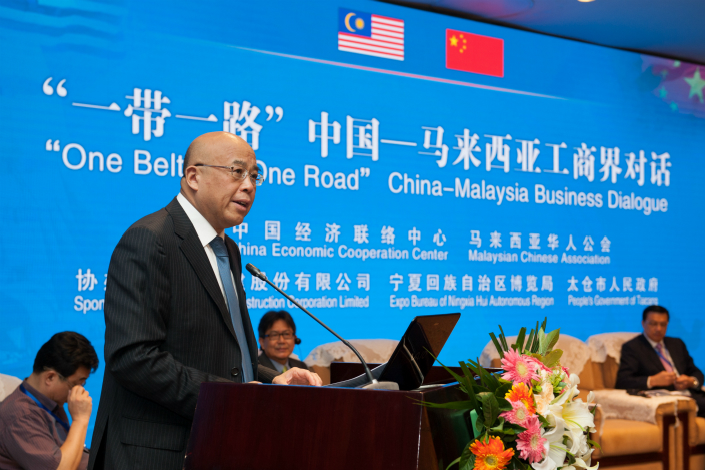 The $12.8 billion East Coast Rail Link in Peninsular Malaysia is the largest commercial deal ever signed between China and Malaysia. Above, Zhou Li, deputy head of the International Department of the Communist Party of China's Central Committee, speaks at the "One Belt, One Road" China-Malaysia Business Dialogue in Beijing in July 2015. Photo: Visual China

Ground has been broken on a Chinese-built, mega rail link in Malaysia — to date the single largest construction project approved under China’s "Belt and Road" initiative.

The 55-billion-ringgit ($12.8 billion) project, called the East Coast Rail Link, is the largest commercial deal ever signed between the two countries.

Malaysian Prime Minister Najib Razak said at the groundbreaking ceremony on Wednesday that the 688-kilometer (427.5-mile) railway, which is scheduled to take seven years to complete, will cut travel time from the northeastern city of Kota Bharu to suburban Kuala Lumpur from seven to four hours, the official Xinhua News Agency reported.

In 2013, China set a goal to build a modern “Silk Road,” promoting the country’s investment and infrastructure through land corridors to other parts of Asia and sea routes navigating toward the Middle East and Europe.

Chinese State Councilor Wang Yong said he hoped that both China and Malaysia could seize the opportunity brought by the Belt and Road initiative to mutually benefit.

The project will create 80,000 jobs in Malaysia during construction and more than 6,000 stable jobs once the railway starts running, said Liu Qitao, chairman of China Communications Construction Co. Ltd. (CCCC), which is building the railway.

CCCC will also help train more than 3,000 Malaysians involved in the construction and operation of the project, Liu said.

However, the project still has some obstacles to overcome, including land requisition and demolition along the railway’s route, according to a CCCC statement.