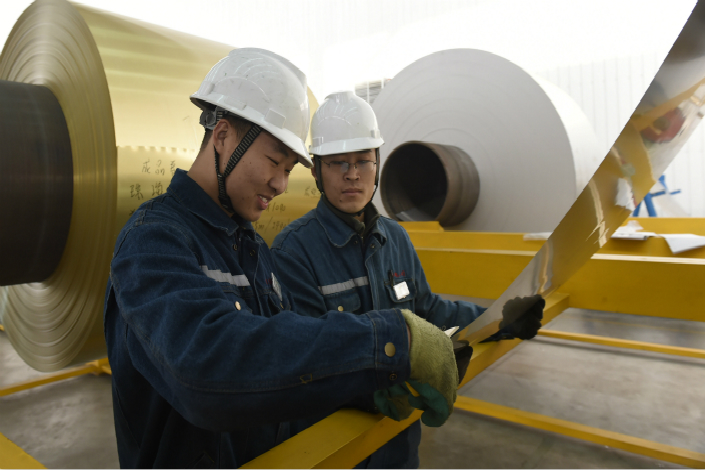 The cuts took effect recently “in response to the relevant governmental regulations” and represented about 29% of the group’s manufacturing capacity for electrolytic aluminum products, Hongqiao said Tuesday in a Hong Kong Stock Exchange filing.

In June 2016, government agencies including the National Development and Reform Commission called for halting unauthorized output of electrolytic aluminum, steel and ships. The decision covered production installed or facilities launched between 2004 and May 2013.

Hongqiao’s decision affects facilities in Shandong province that were added as a result of construction projects started in late 2012 and early 2013, according to the Shandong Development and Reform Commission, the province’s top economic planner.

Hongqiao said it would continue producing at other facilities with a combined capacity of 6.46 million tons. These plants were “all filed properly in accordance with relevant regulations,” the company said.

The cutbacks align the companies with the Chinese government’s “supply side reform” initiative and efforts to protect the environment through stricter regulation of heavy industry.

A central government circular in April followed up on a 2016 directive that urged companies to finish all production cuts within six months. Two days later, the government of Changji Hui Autonomous Prefecture in northwestern China’s Xinjiang Uyghur Autonomous Region vowed to reduce its aluminum production capacity by 2 million tons.

Shandong is the largest electrolytic aluminum producing region in China, followed by Xinjiang.

Hongqiao is expected to cut another 660,000 tons of production capacity next winter to meet the government’s emission-control rules for heating plants, according to a Guotai Junan Securities analysis.

Hongqiao said it will seek ways to offset the financial impact of capacity cuts, “including asset disposal and communicating with relevant governmental authorities on industrial policies and plans.”

Trading in Hongqiao’s Hong Kong-listed stock has been frozen since March 22 pending the expected release of audit results for last year. The company has yet to release a 2016 financial report. It scheduled an annual general shareholders meeting for August 31.