China Tells Foreign Investors: All Aboard 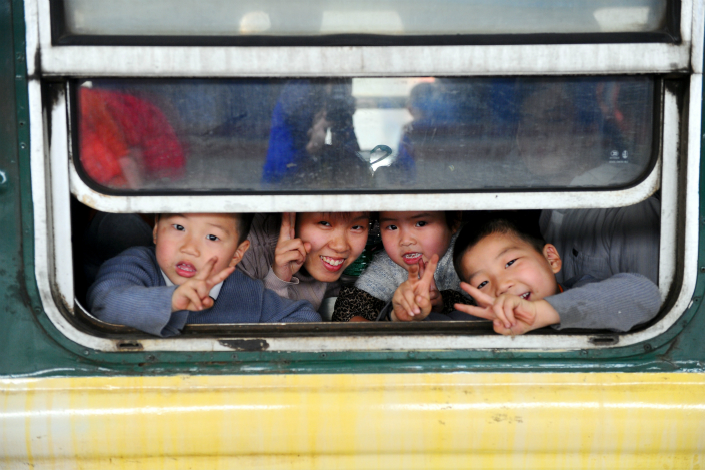 The State Council said in a statement Wednesday that it will clarify the timetable to broaden overseas investors’ access to the financial sectors and nine other industries, including passenger rail transportation, but did not specify a date. Above, young passengers peer from a train window in Guangzhou, Guangdong province, in January 2013. Photo: Visual China

(Beijing) — China has pledged to unveil a timetable for the opening of several sectors — including banking, securities and insurance — among other favorable policies to entice foreign investors, as direct investment into the country has continued to fall in recent months.

The State Council, China’s cabinet, said in a statement Wednesday that it will eventually clarify the timetable as well as a road map to broaden overseas investors’ access to the financial sectors and nine other industries — including new-energy car manufacturing, ship designing, passenger rail transportation, gas-station operation, and internet cafes — but did not specify a date.

Foreign investment in most of those industries is currently restricted, typically with the requirements that a joint venture be set up with a Chinese partner and that the local player should take the controlling stake of the partnership. Internet cafes, however, are off limits to foreign investors, according to the 2017 version of the “Foreign Investment Industrial Guidance Catalogue.”

The statement followed another document the State Council issued in January regarding the boosting of foreign investment, which has slowed in recent years as rapidly rising labor and land costs in China have forced investors to move their manufacturing to cheaper locations in Southeast Asia, while developed economies, including the U.S., have been encouraging their companies to return to create jobs.

Foreign direct investment (FDI) in nonfinancial sectors edged down 0.2% from a year ago to $126.0 billion in 2016, marking its first fall since 2009 during the global financial crisis. FDI in dollar terms has continued to drop on a yearly basis since April of this year. In yuan terms, it decreased 1.2% year-on-year in the January-through-July period, deepening from a loss of 0.1% in the first half of the year, according to figures from China’s Ministry of Commerce.

The Wednesday statement provided other incentives to lure foreign investors, including tax breaks for the reinvestment of profits in projects encouraged by the Chinese government, financial subsidies for the establishment of regional headquarters in the country, and support for participation in the mixed-ownership reform of state-owned enterprises.

It also promised investors the freedom to repatriate the profits and dividends they make in China overseas. Many foreign companies have complained about delays or extra documentation needed to send profits out of the country, blaming the difficulties on government restrictions, including unpublished “window guidance” given to banks, which were aimed at stemming capital outflows, according to previous media reports.

The State Council added that it will start a campaign to crack down on infringement of foreign companies’ intellectual property rights and enhance the punishment of offenders.

China’s IPR protection has again come under the spotlight since U.S. President Donald Trump on Monday formally asked U.S. Trade Representative Robert Lighthizer to determine whether to investigate Chinese government policies and practices that may have allowed the theft of American intellectual property. The move by the White House has fueled concerns over rising trade tensions between the world’s two largest economies.