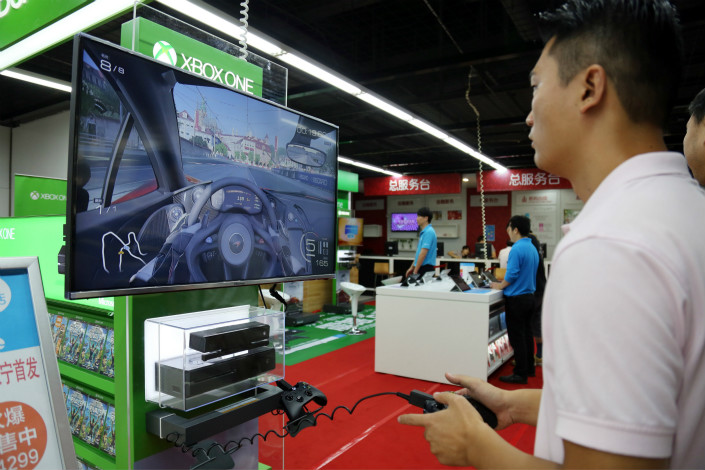 While video-game consoles and games are a small business in China compared with the online-gaming industry, many observers point to a growth rate for consoles that is well above the industry average. Above, a customer tries out an Xbox One game console at a Suning home appliances store in Shanghai in September 2014. Photo: IC

Three years after the lifting of a ban on console gaming in China, Sony Corp.’s PlayStation and Microsoft Corp.’s Xbox are stumbling in the contest for relevance in one of the world’s largest gaming markets.

Many dynamics are behind the disappointing performance so far, most notably the late arrival of consoles to the market and broader changes that are seeing more gamers increasingly favor mobile devices. But some also see encouraging signs, including a growth rate for consoles that is well above the industry average and increasing participation in the space from game developers.

Interest in the format appeared to be picking up at the latest edition of ChinaJoy, the largest trade show for the nearly 200-billion-yuan ($30 billion) industry held in Shanghai last month, noted one developer who attended. He and a small but growing group of others are creating titles for the China market in response to perceived growing momentum. But most participants acknowledge the road into China will be long and difficult for console-based games.

“The best you can say is that it’s developing steadily, but the pace isn’t very fast,” said Zhang Hanrong, founder of Megafun Games, which has developed the console game “Hidden Dragon Legend” for both the Chinese and international markets. “There aren’t a lot of strong prospects, partly because there aren’t a lot of developers, and more players are needed.”

Zhang’s less-than-enthusiastic views are borne out by the numbers. Sales of consoles and games were worth a meager 5 billion yuan last year, less than 3% of China’s massive online-game industry’s 184 billion yuan, according to Lu Yihe, an analyst at data tracking firm iResearch. Coming off such a small base, the console sector was able to grow about 57% last year, or about double the rate of the broader online game industry, a Ministry of Culture official said at an event late last year.

Hopes were high when Beijing lifted a decadeold ban on the import of gaming consoles in 2014. Before that, Chinese gamers were mostly sidelined from console-based play, though a niche gray market also formed through the smuggling of products from other markets. After the lifting of the ban, Microsoft was first out of the gate with the launch of its Xbox One in China in the fall of that year. Sony wasn’t far behind, rolling out its PlayStation 4 in spring of 2015.

Nintendo Co. Ltd., which manufactures the Switch console and many proprietary games — including those featuring the well-known cartoon plumbers Mario and Luigi — has yet to enter the mainland market.

Xbox models now begin at about 2,500 yuan, while PlayStations start at about 3,000 yuan, according to prices on the popular Tmall online marketplace.

Microsoft and Sony don’t release China sales figures, but iResearch’s Lu said the pair sold a combined total of around 1.2 million consoles last year, bring their total for the last two years to about 2 million. That pales in comparison with global sales, which have reached nearly 60 million consoles for the PlayStation 4 and 30 million for the Xbox One over the last four years, he said.

“It would be misleading to compare the console market segment to that of online games in China,” said Thomas Rosenthal, general manager for Greater China of Digital Bros. Group, which licenses games to third-party operators in the market. “Although console games now represent a negligible portion … of the overall Chinese game market, … game companies should rather compare the console install base in China to that in other major markets like Japan, Europe, and U.S. when making a decision to enter the Chinese market. When comparing with other major territories, numbers today look extremely promising. Our company is monitoring the market very closely.”

A major factor limiting the growth is a lack of games, as many local developers shy away from the consoles over concerns they won’t recoup their costs of creating titles for the platforms. Sony’s China PlayStation store shows a modest 59 titles available, about a quarter of those developed specifically for Chinese gamers. Xbox lists an even smaller 30 titles for its consoles from its China store.

A number of other factors are also conspiring to hold back the format, including the existence of the gray market that existed long before official consoles from Microsoft and Sony were allowed to enter. Other inhibiting factors include a growing preference in China for portable games, as evidenced by the recent huge popularity of Tencent’s “Honour of Kings” smash hit that can be played on smartphones and can link with the company’s hugely popular WeChat instant messaging app.

Two other major factors include the lack of availability in China of some of the world’s most popular titles due to the nation’s strict approval process, and also Xbox’s sealing off of China from other parts of the world for gamers who like to play others over console networks, said iResearch’s Lu.

“Even though the PlayStation 4 isn’t sealed off, internet connectivity problems in China can still create limitations for gamers who like to play globally,” he said. But he also pointed out that console games have several advantages over PC- and smartphone-based rivals, including a better user experience, more hit titles and better suitability for a family gaming experience due to their typical location in residential living rooms.

Rosenthal was also upbeat on the format’s longer-term prospects in China, saying consoles should benefit from China’s growing middle class that is willing to pay for entertainment and demands increasingly higher quality content.

“Given the numbers in China and the growing integration with the global game market, game companies will have to consider releasing in China simultaneously to global releases in order to reach a community of hard core gamers which is sizeable, well-informed and passionate and that deserves due consideration,” he said.