By Li Yan and Zhang Lijuan 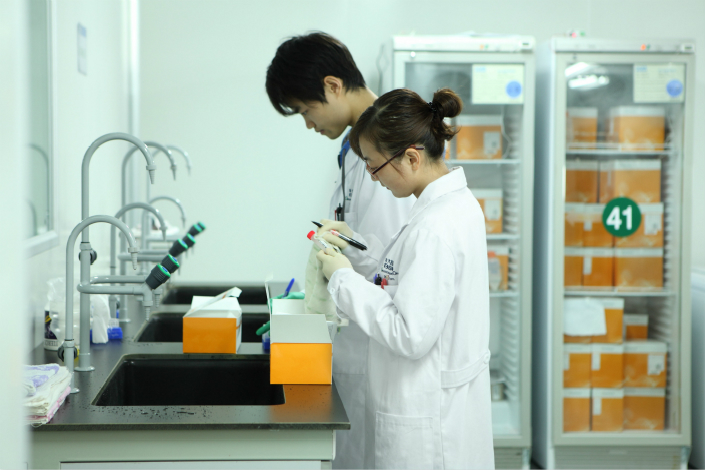 Berry Genomics, one of the largest rivals to government-backed genomics giant BGI, injected all of its 4.3 billion yuan ($646 million) in assets into Chengdu Tianxing Instrument and Meter Co. Ltd. in a reverse merger. Above, researchers work in a BGI lab in Shenzhen in March 2011. Photo: IC

One of the largest rivals to government-backed genomics giant BGI, Berry Genomics injected all of its 4.3 billion yuan ($646 million) into Tianxing Instrument.

Shortly after Berry Genomics’ backdoor listing, BGI announced in March that it would make its debut on the domestic bourse, with plans to raise 1.73 billion yuan.

BGI eventually raised more than 5 billion, and immediately ran into the 44% limit on its first day of trading, reaching a total market cap of 7.86 billion yuan.

Berry Genomics and BGI do not have the option of going public in overseas markets due to Chinese regulations that forbid companies in sensitive sectors — such as research in human stem cells and gene diagnosis and treatment — from accepting foreign investment.

Like BGI — which utilizes most of its science in reproductive health testing, a business that generated more than half of the company’s 1.7 billion yuan in revenue last year — Berry Genomics’ core business is also in prenatal testing that screens fetuses for hereditary diseases.

Prices are not listed for Berry Genomics’ services — which include tests that screen for genes that cause deafness, cancer and autism. Nonetheless, business is booming. The company reported over 6 billion yuan in profit for three consecutive years after 2013. In the first six months of 2016, it made 5 billion yuan in profit.