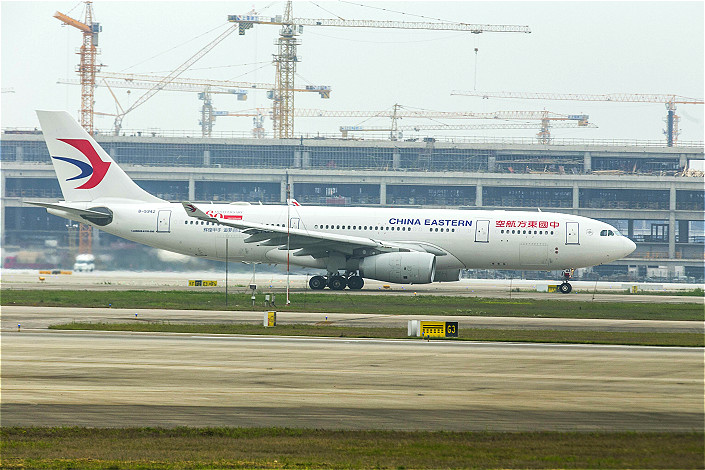 The mixed-ownership reform program aims to bring private-sector investment and management into state-owned companies to make them more dynamic. Above, a China Eastern Airlines jetliner taxis at Shanghai Pudong International Airport on May 5. Photo: IC

Mixed-ownership reform has become a buzzword of the moment in Beijing, as the central government launches one of its boldest efforts yet to shake up the stodgy state-run sector.
At its most basic level, the program aims to bring private-sector investment and management into state-owned companies, many operating in state-monopolized sectors, to make them more dynamic. As the pilot program gets rolling with announcement of the first new plans, Caixin Global takes a look at some of the basics that make this reform different from others, and what lies ahead.

What exactly does the mixed-ownership program entail?

The program is aimed at introducing strategic investors to units of some of the biggest state-owned enterprises. In most cases, each company selects a unit that will participate in the program and then sells a stake in that unit to its new private-sector partners. Private-sector partners typically get about 30% to 45% of the unit, while the parent maintains a similar stake. Funds raised through the stake sale typically total more than $1 billion, and are then reinvested in new projects between the state-owned company and its new private strategic partners.

How does this differ from the many big state-owned enterprises that are already publicly listed?

Most big state-owned companies that have been listed to date remain firmly in control of the central government, which typically maintains 50% or more of the company’s shares. Under that arrangement, the central government sees anyone who buys shares on the open market as purely financial investors, and typically gives them little or no say in the company’s management or strategic planning. The new plan treats investors as strategic partners who can profit through their equity stake if the partnership succeeds. Those partners have a specific mandate to work with the state-owned company to create new products and services that can be jointly developed and marketed by both sides.

How old is the program, and how many companies are in it so far?

Word of the program first emerged in 2015, with an initial batch of about 10 companies named as participants. Those include the likes of telecom services provider Unicom Group, Harbin Electric Corp., China Shipbuilding Industry Corp., and the parent of China Eastern Airlines. This year, a second round of companies was also selected, and selection for a third round of companies is also reportedly in the works. After being selected, each company must create a proposal that requires approval by the National Development and Reform Commission, China’s state planner, before implementation.

How many companies have announced plans so far, and what do they look like?

At least three companies have announced plans to date. One of those, China Eastern Air Holding Co., parent of China Eastern Airlines, announced its plan to sell 45% of its logistics unit to four outside investors in June. It was followed over the last two weeks by similar plans from Unicom Group and China National Gold Group Corp. Each of the newly announced plans has consisted of three parts. The central piece involves selling a stake to new investors, which numbered as many as 14 in Unicom’s case and as few as four for China Eastern. That sale often entails the issue of new shares, providing funds for future collaboration. A third part of the program also typically sees top managers and key employees receive a stake in the state-owned company’s unit participating in the program.

Is this the first time big state-owned companies have worked with private-sector partners?

China has experimented with a number of similar scenarios over the years, though mixed-ownership reform is one of the more-formalized programs. Over the last 15 years, two of China’s big three telecom carriers sold strategic stakes in themselves to foreign investors from Europe and Asia. But in all of those cases, the foreign investor ended up selling the stake without any notable strategic collaboration. Similar equity tie-ups have occurred between most of China’s top airlines and foreign partners. Leading oil refiner Sinopec sold a major stake in its retail operations to a group of private investors in 2014, with a similar aim to the current program. And most recently, Beijing has been promoting the idea of public-private partnerships, which encourage state-owned enterprises to undertake individual projects with non-governmental entities, many involving infrastructure development.