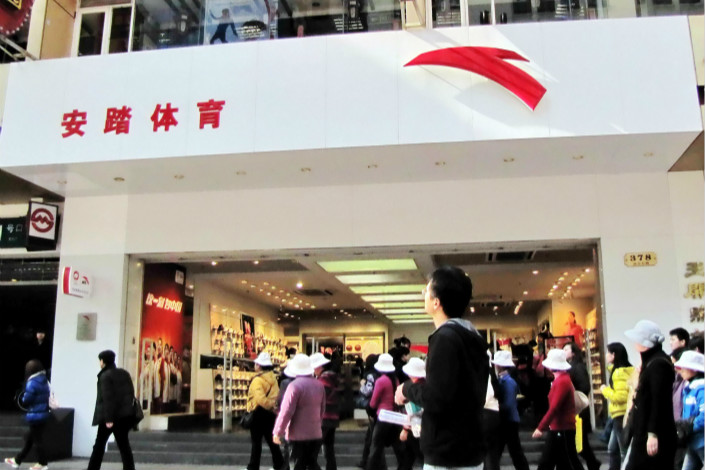 Anta Sports Products Ltd., the domestic sportswear sector’s top player by revenue, reported its profit surged 28.5% in the first half of the year. The brand, whose Shanghai store is pictured above, has maintained double-digit profit growth since 2013. Photo: Visual China

Only the fourth-largest player by revenue, Xtep International Holdings Ltd. — which recently dropped from the third spot amid business restructuring — suffered a drop in profit.

Anta Sports Products Ltd., the sector’s top player by revenue, reported its profit surged by 28.5% to 1.4 billion yuan ($220 million) in the first half of the year.

The brand — which grew out of an obscure shoe factory in Fujian province — has maintained double-digit profit growth since 2013. The success has been due in part to Anta’s “expanded and improved” e-commerce business, the company said in its latest interim report.

“To cope with increasing demands in online shopping, we offered a selection of new products by launching exclusive online products and offline in-season products,” Anta said in a statement.

Li Ning’s revenue generated by e-commerce surged 58% during the period. The company has shuttered 111 brick-and-mortar stores and said it will continue closing inefficient and unprofitable outlets.

Similarly, 361 Degrees cut its number of stores by 498 from January to June.

361 Degrees recently overtook Xtep to become the third largest industry player, in terms of revenue. Xtep reported a profit decline of 18% to 310 million yuan in the first six months of the year.

Xtep has maintained healthy sales, and same-store growth has improved, but company performance has been hampered by its strategy to restructure part of its businesses, according to analyst Eugene Mak from China Merchants Securities.

Xtep began a major restructuring in 2016. It shut down more than half of its 600 Xtep Kids stores and will merge its children’s clothing line into its adult division for “higher efficiency,” the company said.

“Revenue contribution to the Group from the XTEP Kids division is minimal in the first six months of 2017, as we are still digesting some of the old products in order to pave way for newly designed products launching in the second half of 2017,” Xtep said.

Anta is the only company that has expanded its physical presence in 2017. The number of its stores increased by 734 in the first half. The company said it has benefited from a “multi-brand” strategy, promoting its high-end Fila and Descente product lines.

FILA was originally founded in Italy, and its Chinese unit was acquired by Anta in 2009.

Li Ning, meanwhile, promoted its brand through sponsorship. Last week, it extended a five-year deal with the Chinese Basketball Association for another half decade.

Foreign sportswear brands highly value the China market. Nike said its margin in the country was about 35%, while that in the U.S. was only 13%. Sales for Adidas and Reebok — both brands of Adidas AG — grew faster in China than in any other market, at 28% in the first half of 2017 on a currency-neutral basis.

Adidas CFO Harm Ohlmeyer said Chinese online marketplace Tmall — under e-commerce giant Alibaba — “is where the consumers are, and this is where we (Adidas) can clearly present the brand in a very dynamic and qualitative way.”