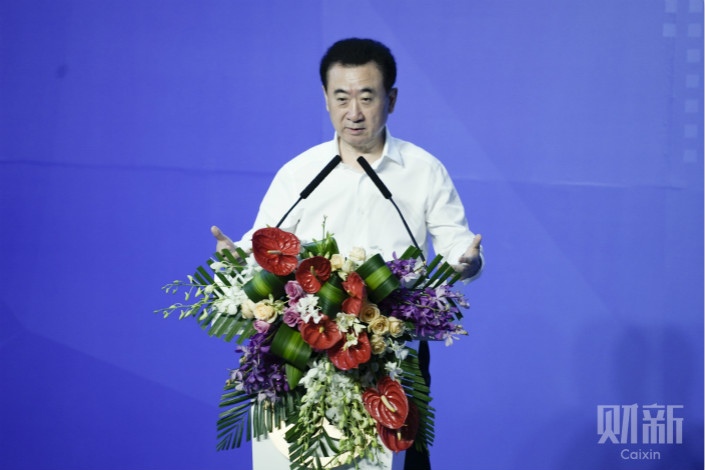 Boxun, a Chinese-language political tabloid based in the U.S., said over the weekend that Chinese authorities had prevented Wanda Group founder Wang Jianlin and his family from leaving China. Wanda said Monday the report was "utterly baseless." Photo: Yang Yifan/Caixin

Wanda Group’s shares plummeted as much as 10% Monday morning over rumors denied by the company that its founder and chairman, Wang Jianlin, has been detained by Chinese authorities.

The property developer released a statement Monday saying that “individuals with ulterior motives have recently created and spread various vicious rumors regarding the chairman of Wanda Group.”

Wanda Hotel Development’s shares clawed back some of their losses over the course of the day, closing down 8.09% at HK$1.59 per share (20 U.S. cents).

Wang and other top executives at some Chinese firms have recently come under the spotlight due to their big deal-making in overseas markets. Those companies have spent billions of dollars on international purchases, including Hollywood studios and sports teams, which raised alarm bells from Beijing worried about large fund outflows.

The chairman of at least one other major global acquirer, Anbang Insurance, dropped out of view in June and was unable to perform his daily functions, the company said in statement at that time. The news prompted a sell-off of shares related to the company at that time.

Boxun, a Chinese-language political tabloid based in the U.S., reported over the weekend that authorities had prevented Wang and his family from leaving China. The report said Wang was stopped at Tianjin Binhai International Airport from departing for the U.K.

“All of these rumors are utterly baseless,” the company said in its statement.

Shares of Hong Kong-listed Wanda Hotel Development slumped as much as 10% early on Monday, while a 10-year dollar bond issued by one of Wanda’s property units and traded in Hong Kong dropped as much as 2.4%.

Wanda added that it plans to take legal action against the media outlets responsible for last week’s report.

Earlier this month, Wanda Hotel Development’s shares reached a two-year high after the company said it would pay 7 billion yuan ($1.05 billion) for two of its sister companies in a major restructuring. Weeks before that, parent company Wanda Group agreed to sell off most of its hotel and theme-park assets to developers R&F Properties and Sunac China Holdings Ltd., in an ongoing effort to slim down its debt load.