By Coco Feng, An Limin and Zhang Zhongyue 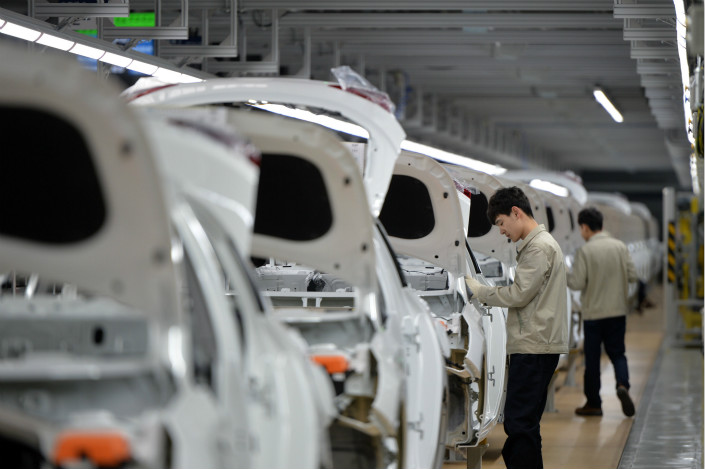 Conflicting stories emerged on Wednesday over the reported “temporary volatility in the production system of Beijing Hyundai,” the Chinese joint venture of Hyundai Motor Corp. and BAIC Motor Corp. Ltd. Above, cars are assembled in the Beijing Hyundai plant in Cangzhou, Hebei province, on Feb. 21. Photo: Visual China

However, BAIC Motor Corp. Ltd. — the South Korean automaker’s Chinese partner — said that “temporary volatility in the production system” did not shut down production outright.

Conflicting stories surfaced about the joint venture’s disruptions in China, a major market for Hyundai.

A Beijing-based supplier of fuel-tank parts halted deliveries due to delayed payments, according to a Hyundai filing with the Korea Exchange.

But BAIC said later that there was only “temporary volatility in the production system of Beijing Hyundai,” the joint venture, according to BAIC’s filing with the Hong Kong Stock Exchange.

A BAIC spokesperson told Caixin that the volatility didn’t lead to a production halt, and BAIC said in the Hong Kong Stock Exchange filing that production and operations at the Beijing Hyundai factories were normal.

An auto dealer representative who asked not to be named said deliveries from Hyundai were normal, and that there had been no notices of supply disruptions.

The stock exchange filings came a day after Beijing Hyundai reported a plunge in China sales for the first half of 2017 to 301,000 units, down 42% from the same period in 2016. The report was included in a BAIC filing with the Hong Kong Stock Exchange.

BAIC reported a 59% decline in profit year-on-year in the January-through-June period to 986 million yuan ($149.3 million). The company blamed the decline in part on “a market downturn for Korean-branded vehicles.”

South Korea companies in the retail and tourism sectors have also reportedly struggled since earlier this year due to Chinese consumers’ negative sentiments toward South Korea’s decision to deploy a U.S. missile-defense system that China believes will influence China’s privacy and national security.

South Korean retailer Lotte Group, which agreed to provide a golf course for the controversial Terminal High Altitude Area Defense, or THAAD, missile system in exchange for other land, has in recent months closed most of its 99 stores in China due to the consumer backlash.

From January through June, South Korean-brand auto sales in China totaled 430,900 units, accounting for 3.83% of the Chinese market, down from a 7.35% market share last year, according to the China Association of Automobile Manufacturers.

Chinese consumers have rallied against foreign companies in the past in response to geopolitical conflicts. In 2012, for example, anti-Japan protests led to boycotts of Japanese autos and other products due to a territorial dispute over islands in the East China Sea.