In Overseas Deals, China Goes Easy Only on Tech, Manufacturing 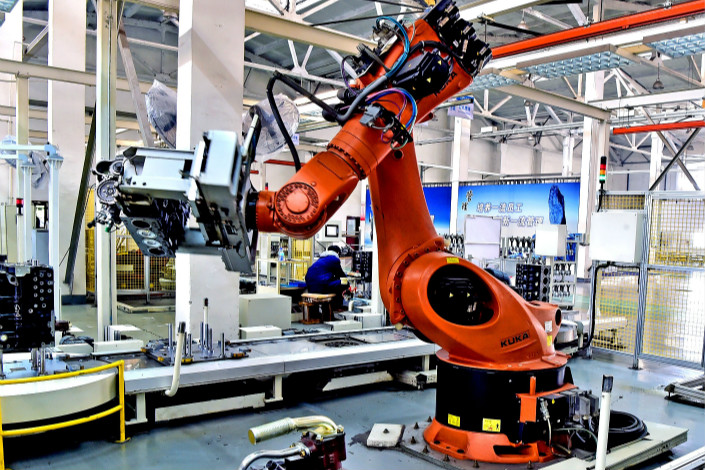 The manufacturing and information technology industries have accounted for a much higher proportion of China’s outbound investment this year following the central government’s clampdown on “irrational” deals overseas in areas such as real estate. Above, diesel engines get assembled at a Quanchai Group Co. Ltd. plant in Anhui province on March 3. Photo: IC

Chinese regulators remain supportive of outbound deals in technology and manufacturing, while keeping a wider curb on investments in most other sectors overseas, multiple industry sources told Caixin.

After a record capital exodus in 2016 as Chinese companies binged on overseas acquisitions, the government clamped down on what it called “irrational” deals via measures such as greater scrutiny and turning off the bank funding tap. On August 18, China’s State Council released rules that severely restricted investment in five sectors: real estate, hotels, cinemas, entertainment and sports. However, the rules have been in place informally since late last year.

The rules are taking effect, as nonfinancial outbound direct investment (ODI) plummeted 44.3% year-on-year to $57.2 billion during the first seven months of the year. Real estate investment abroad fell 82.1%, while outbound investment in culture, sports and entertainment industries fell 79.1%, according to data from the Ministry of Commerce. Together, they accounted for a mere 3% of total nonfinancial ODI. Meanwhile, manufacturing and software and information technology sectors accounted for a much higher proportion of outbound investment at 18.4% and 11.2% respectively as of end-July.

“We’ve received support from the State Administration of Foreign Exchange (SAFE) (one of the regulators of outbound investments) after we emphasized the importance of the technology transfer brought about by this deal,” said Zhang Lin, vice director of a Chinese subsidiary that was set up to acquire Canadian automated production system manufacturer Valiant TMS Group.

The subsidiary, set up by Hubei Huachangda Intelligent Equipment Co. and a trust company, acquired Valiant TMS on March 17 for 1.98 billion yuan ($302.7 million).

Zhejiang Wanfeng Technology Co., which acquired 60% of the Canadian arm of Austria-based Diamond Aircraft late last year, said it got the regulatory approval within days.

“Our outbound investment is related to our core business. SAFE and related departments evaluated the authenticity of the investment and approved it because it is consistent with China’s going-abroad strategy,” said Zhao Yahong, a board member at Zhejiang Wanfeng Technology Development Co.

Earlier last year, Wanfeng acquired an automated welding manufacturer that attracted regulators’ attention because the price tag was bigger than what the firm was worth at the time.

“SAFE evaluated whether our capabilities were comparable and whether, we had the ability to organize and manage the purchased firm after the acquisition. Financial leverage was also considered,” Zhao said.

The acquisition was approved and Wanfeng acquired the company for $302 million with the help of a strategic investor.