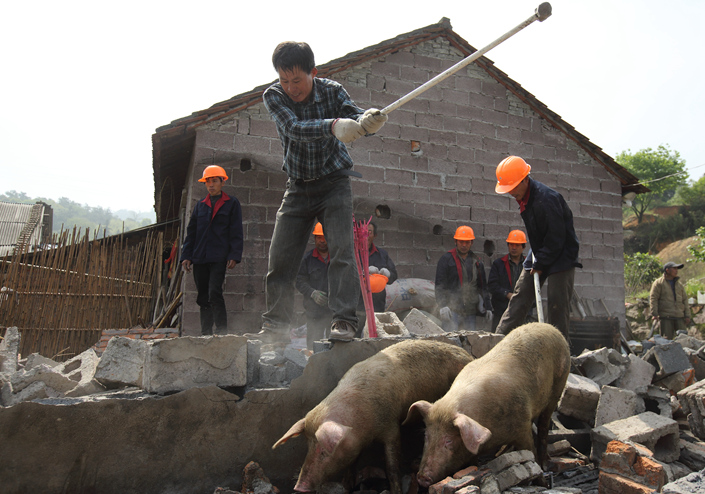 Inspectors with the Ministry of Environmental Protection uncovered more than 18,000 cases nationwide in which environmental laws were flouted during the latest round of inspections. Above, workers hired by a local township government in Zhuji, Zhejiang province, dismantle a pig farm in April 2014 as part of Zhuji's campaign to close unqualified livestock farms to reduce water pollution. Photo: IC

(Beijing) — Raw sewage dumped into a river in northeast China was one of the thousands of cases uncovered in the latest round of inspections by China’s environmental ministry.

Inspectors toured eight provincial-level areas, including Jilin province in the northeast, Shandong and Zhejiang province in the east, and Sichuan province and the Tibet autonomous region in the southwest during a monthlong investigation that began Aug. 7. The inspectors uncovered more than 18,000 cases in which environmental laws were flouted, and they detained 285 people in connection with various violations, the Ministry of Environmental Protection (MEP) said.

In Jilin, inspectors uncovered factories discharging untreated sewage and wastewater into the Yitong River, the main river that flows through the provincial capital of Changchun, inspectors said.

Many cattle farms in Shandong that had polluted local waterways were ordered to close or relocate, the ministry said.

More than 4,000 company executives and managers have also been named and shamed over environmental irregularities, according to a MEP statement issued Tuesday.

Polluters in these areas were fined 280.9 million yuan ($43.0 million) in total, the ministry said.

The ministry introduced the inspection program earlier last year amid worsening air, water and soil pollution in China. Thousands of inspectors that fanned out nationwide have conducted four rounds of investigations, taking industrial polluters to task with orders for mandatory upgrades or closures, in addition to slapping fines on violators.

Much of northern China was hit by two serious bouts of smog in the winter of 2016, setting off the highest alarm over foul air in dozens of cities, including Beijing, where schools were shut, highways closed, and flights canceled due to poor visibility.

Meanwhile law enforcement authorities around the country filed more than 3,000 cases against polluters in accordance with the country’s Environmental Protection Law in July, according to Tian Weiyong, head of the ministry’s Bureau of Environmental Supervision and Inspection.

More than 40% of the cases have led to orders for factories to close, according to Tian, and those implicated in 255 cases were referred to prosecutors for criminal investigation.