By Xiao Ying and Yang Ge 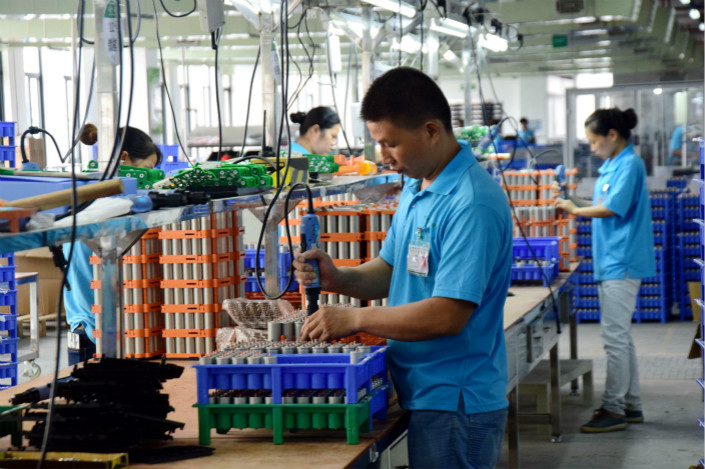 The price spike of cobalt over the past 12 months has yet to hit most companies in the new-energy battery supply chain, but that could change in the second half. Above, workers at OptimumNano Energy Co. Ltd. in Chenzhou, Hunan province, assemble batteries for new-energy vehicles on June 28. Photo: Visual China

Spiking cobalt prices are expected to squeeze makers of new-energy vehicle batteries in the second half of the year as they are unlikely to be able to pass on rising costs to manufacturers trying to meet Beijing’s ambitious targets for the sector.

Over the last 12 months, cobalt prices have more than doubled to a current level of about $60,000 per metric ton ($66,140 per ton), versus $25,000 a year ago, according to the London Metals Exchange. That jump has helped fuel profits for miners of the metal, which is a key component in batteries used to power electric and hybrid cars, the two largest types of new-energy vehicles.

The price spike has yet to hit most companies in the battery supply chain because many are still using material stockpiled before the latest price spike. Use of those stockpiles, along with booming demand from China’s new-energy car sector, helped names like Ningbo Shanshan Co. Ltd. and Xiamen Tungsten Co. Ltd. post healthy profit growth in the first half of the year.

But margins could come under pressure in the second half as stockpiles dwindle, analysts said. At the same time, manufacturers are likely to pressure their suppliers to maintain or even lower prices as competition intensifies. One company, Beijing Easpring Material Technology Co. Ltd., said in its midyear report that its profits could come down in the second half of the year due to such a squeeze.

Beijing has put big hopes on the new-energy vehicle sector to create a field of high-tech developers that can export their products, and also put a new generation of low or zero-emission cars and trucks on the road to clean up the nation’s polluted air. But abuses of a wide range of government incentives led Beijing to overhaul its system at the end of last year, and new programs are only now falling into place.

As a result of those shifts, new-energy vehicle sales reached just 195,000 units in the first half of the year, well off track to meet a 700,000 total for the entire year forecast by the China Association of Automobile Manufacturers. Beijing has set a target of putting 5 million new-energy vehicles on China’s roads by 2020, but was only about a quarter of the way to that goal as of the middle of this year.

With cobalt prices unlikely to come down anytime soon, battery-makers are likely to look for longer-term supply agreements in order to manage costs. They are also likely to experiment with batteries using less cobalt and more nickel, whose price has been more stable. Such batteries typically use nickel, cobalt and manganese as their three main metal components in a ratio of 5:2:3 respectively. But the nickel component could rise to as much as 6 or higher.

Manufacturers like Guoxuan High Tech Co. Ltd. indicated they are currently considering shifting to higher nickel-content batteries, but have not finalized any plans for mass production.