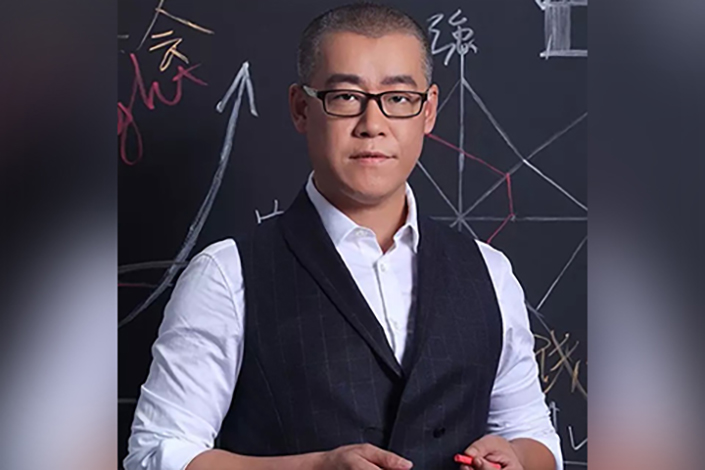 After tutoring high-schoolers, acing the Test of English as a Foreign Language, and selling his very own cryptocurrency, PressOne, Li Xiaolai has become a self-made entrepreneur with a massive following.

Li, a bespectacled 45-year-old, is one of the early investors in bitcoin and other virtual currencies in China. Apart from PressOne, Li also has a stake in yunbi.com, the country’s most active trading platform of cryptocurrencies, as well as another blockchain-based coin, EOS.

On Sept. 6, two days after Chinese authorities banned ICOs, Li sat down with Caixin in an exclusive interview and talked about his investments and his take on the government’s response to the fast-growing sector.

The following excerpts are edited.

Caixin: Following the ban, what do you plan to do next? Will PressOne turn overseas like other ICO issuers?

Li: There’s not a lot of point in talking about PressOne, as it will come to a close. We have formulated a detailed refund policy based on recommendations from relevant government departments. It will kick off very soon. After that, I will probably invest my own money in PressOne.

Our strategy has always been international because blockchain projects are global by nature and are impossible to limit to just one geographic region.

There was controversy over the fact that PressOne never had a “white paper” (an official document required before launching an ICO). What is your response?

I think our official website, with thousands of words and in multiple languages, is the best manual. I write a lot, and I have been very concerned about whether an average reader understands what I say.

We held an information meeting and talked about the details of the PressOne project. We did not go into technical details because I believe investors do not look at or understand them.

Our technical team’s abilities are very strong. To showcase a bunch of accomplished people is a very clever way of advertising, but I don’t like that. Also, I have been a blockchain investor for seven years. It’s not a stretch for me to say that there are not many people out there who have the same network as me.

Having said that, PressOne went to extremes in terms of investor-risk education. We told them that the token would not generate earnings until one year later, in order to keep short-term investors away. Once the ICO was completed, we offered returns for buyers who bought on impulse.

You are one of Yunbi’s two shareholders, and you own 25% of the shares. But you also issue and invest in new cryptocurrencies that are traded on the platform. Some have argued that this constitutes a conflict of interest. What do you make of this?

There is a historical reason for this: I was an early investor in Yunbi. I would like to exit, but no one wants to buy my shares.

From a long-term perspective, Yunbi is not worth very much money. It just has appeared very valuable and popular for the last three to four months. Before that we worked hard to code (develop new cryptocurrency via computer coding), but no one was paying any attention to it.

Why is Yunbi profitable now?

Yunbi’s only source of revenue is service fees.

Before last year, Yunbi, like many other exchanges, did not charge service fees. Yunbi was losing money, and there seemed to be money on the table we weren’t taking. But looking back now, it was the right decision.

We have a policy of keeping 100% of the money that users deposit with us. We have never moved a penny. Although we don’t think there is any risk in investing with this money, we believe we cannot do this. We have never carried out financing services or services that require leverage. If there is a day that we need to refund customers, Yunbi would be able to do this very quickly.

What is your connection with EOS (a type of cryptocurrency)?

I don’t have a direct connection with EOS. I am an investor, and hold around 5%. The company behind EOS is Block.one, and its chief technology officer is Dan Larimer. In 2013, I invested in the first company that he founded, but it failed. He founded another company that also didn’t last. When he created the third company — Block.one — with other partners, he said he would transfer my original investment of 8% in his first company to the new one. The company later developed EOS, and I invested in it.

Value and risks in ICOs

Do all ICO currencies increase in value once they can be traded on an exchange?

This is not always the case. Some currencies fall below their offer price once listed on an exchange. There are more than 10,000 types of ICO currencies, but people only pay attention to the ones that rise, so they come to this scary conclusion (that they all rise).

Is there a possibility that issuers are manipulating the price behind the sharp rise of ICO currencies?

It is very difficult to manipulate the price of a cryptocurrency when it is traded on multiple exchanges.

Investors should learn to distinguish which investments are more likely to be manipulated. Usually this happens with currencies that have a relatively small market value and are traded on a single exchange.

How innovative and risky is ICO financing?

In traditional financing, companies must go through an approval process to ensure that they have a viable business model. ICO’s situation is fairly special. It allows companies that fulfill minimal requirements to carry out financing globally.

Worldwide, there are more than 4,000 exchanges, which trade over 10,000 different types of cryptocurrency assets. But only 0.1% of them really have value or are recognized by the market.

ICO participants should recognize that the risk is huge. In this newly developing industry, the majority of investors are not qualified. Most of them care about rumors of 10 times, 50 times, 100 times (the rate of return); they do not look at the numbers that are in front of their face.

The future of blockchain

How do you view the future of blockchain technology?

Blockchain can be used in many situations, including charity, poverty alleviation, identity management systems, industry and commercial registration management. For any society, this has huge potential.

Right now, everyone is too focused on the prices of bitcoin and ether. Their attention has been completely captured by money. Large amounts of really valuable blockchain applications have not yet been fully developed and recognized.

Why can’t traditional financing methods such as angel investing and venture capital meet the needs of early-stage blockchain financing?

Angel investors and venture capitalists are interested in investing in blockchain. However, they are restricted by their organizational structure and legal requirements. For example, if the future revenue is virtual tokens, this is not recognized as money by their respective financial affairs teams. There is also legal risk.

Is it possible that ICOs will in the future be limited to a group of qualified investors? What kind of impact will this have on the development of the industry?

This could be a potential direction. Traditional finance tells us it is extremely difficult to distinguish qualified investors from unqualified ones, but despite this, we are still trying. How to determine qualified investors is an entirely technical question. I don’t know how to do this.

How do you view the current situation, and what recommendations do you have?

Everyone seems very pessimistic recently; they think everything has ended. I didn’t originally want to say anything because my every sentence is bound to be misinterpreted, but I can talk about my basic beliefs.