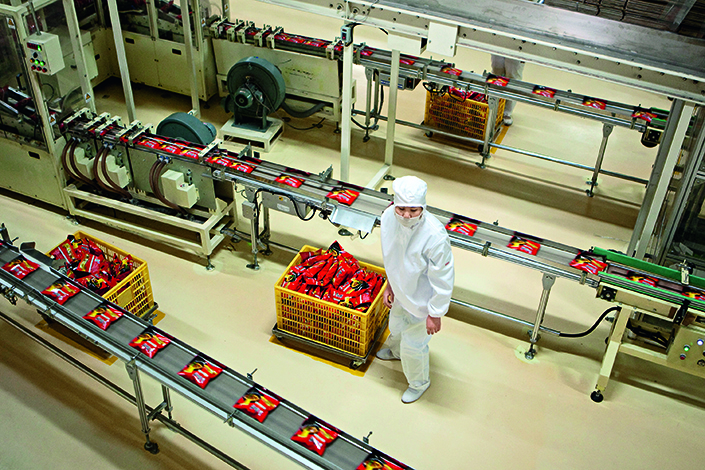 Tingyi (Cayman Islands) Holding Corp.’s Master Kong food empire has lost ground to competitors in the market for instant noodles — once a staple for students and migrant workers — as China’s economy transitions from manufacturing to services. A Tingyi worker mans the production line for Master Kong brand instant noodles in Tianjin in December 2009. Photo: Visual China

Master Kong still has something to learn about the instant noodle business.

For well over a decade, the legendary brand’s owner, Tingyi (Cayman Islands) Holding Corp., had a stranglehold on the instant noodle market in China, thanks to its extensive sales and marketing network.

At that time, Tingyi could get each new product it launched onto store shelves across China, from first-tier cities to the remotest villages, in a couple of weeks, said a former executive of Uni-President, one of Tingyi’s competitors. And the Tingyi product would always get premium shelf space.

Tingyi’s Master Kong food empire rose to power during the country’s urbanization drive in the 2000s, when the aroma of its best-selling product — instant noodles with roast beef — was instantly recognizable on trains and at construction sites across China.

Tingyi’s revenue grew tenfold from 2000 to 2014, according to company financial statements.

Lately, however, business has gotten soggy as the food, once a staple for students and migrant workers, has fallen out of favor as the economy transitions from export manufacturing to domestic services.

The packaged food giant’s profits have fallen each of the last five years, and rating agencies have downgraded the outlook for the Hong Kong-listed company.

Tingyi’s decline over the last five years is the story of a company that has had trouble keeping up with the times. The sweeping, far-flung distribution network that put Master Kong noodles on store shelves in some of the most remote places in China has been less of an asset in recent years as consumer tastes have shifted and distribution channels have evolved with the internet.

The current trend is that consumers are the ones determining which products companies should make, which has hurt traditional packaged-food-makers, said Zhu Danpeng, a senior researcher at the China Brand Research Institute.

“The old days have passed when consumers bought whatever companies sold, and consumer loyalty has fallen to a record low because they have so many choices,” the former Uni-President executive said.

Tingyi was born in Taiwan and entered the Chinese mainland market in the early 1990s. Thanks to its extensive distribution network, the company grew quickly by knocking off leaders in other segments of the food and beverage market. Its brand of mineral water has oversold that of Wahaha, the brand of the largest beverage-maker in China. And its juice drinks have beat Uni-President’s star product, Uni More Orange Juice.

Tingyi’s advantage was its army of sales and marketing people across the country. Its competitors could only reach cities, giving Tingyi the room to run away with the rural market. By 2013, its revenue was triple that of its closest competitor, Uni-President Enterprises Corp.

The rise of e-commerce, however, reduced the need for so many boots on the ground.

Tingyi reacted slowly to the change because it thought online sales wouldn’t amount to much, the former Uni-President executive said.

In contrast, Uni-President embraced the internet earlier. “Uni-President started thinking about transforming its traditional retail channels in 2012, but it wasn’t until now that Tingyi stopped expecting its wide-ranging network to drive sales,” the former Uni-President executive said.

The shift in strategy paid off for Uni-President at its competitor’s expense. Uni-President, whose annual revenue was only one-third of Tingyi’s four years ago, took in nearly 11 billion yuan ($1.7 billion) in the first half of 2017, about 25% less than its rival.

Now, Tingyi is following in Uni-President’s footsteps. Last year, Tingyi started to customize its online promotions based on consumer data provided by Tmall, the online marketplace of Alibaba Group Holding Ltd. Uni-President had made the same move two years earlier.

The goal is to catch up with the times by taking advantage of the internet. “Online and offline will ultimately integrate,” Tingyi spokesperson Li Yilin told Caixin.

The product, along with a handful of star foods and beverages, has fueled the company for decades.

The product development team remains on the company’s margins, while the marketing division, which runs the sales network, continues to dominate.

He said that Tingyi just doesn’t have a culture of innovation or the wherewithal to create one.

Uni-President, on the contrary, long ago turned to new products to increase sales. One way it did this was by creating an “innovation board” of senior staff to oversee product development.

Uni-President launched a high-end line of instant noodles under the name Soup Daren in 2012. The product, along with the new flavors that came out later, boosted the company’s revenue to a record high of 8.2 billion yuan.

Its two successful new beverages, a sea-salt drink called Haizhiyan, which launched in 2014, and a bottled tea called Classmate Xiaoming, which came out in 2015, helped nearly triple the company’s net profit in 2015 to 835 million yuan.

Tingyi did take a few cracks at creating new products. It introduced a vitamin drink called Natural Vitality, challenging Uni-President’s Haizhiyan drinks. But the product didn’t do well, and Tingyi abandoned it in 2016.

The former Tingyi executive told Caixin that the company didn’t do much marketing for new products like Natural Vitality. In attitude, it stands in contrast to Uni-President, which has vowed to launch three products each year that can take the market by storm.

Companies pay a high price to launch new products. Development, production and promotion of a new beverage cost 60 million yuan to 80 million yuan, according to Zhu from the China Brand Research Institute.

However, the market has grown fickle about new products. Six months after Uni-President’s initial success with Haizhiyan and Classmate Xiaoming in 2015, the company's beverage revenue plunged 50%.

“The life cycle for new products has gotten shorter and shorter,” the former Uni-President executive said.

The high cost of launching products may explain why Tingyi has turned to partnerships with established brands. The strategy serves to freshen up the company’s product line without the cost of developing new products.

In autumn 2016, Tingyi teamed up with Starbucks to produce and sell the U.S. coffeehouse chain’s bottled frappuccino drinks in China.

In February, Ovaltine, the flavored drink mix for milk, granted Tingyi exclusive rights to make and sell its products in China.

The company has also sponsored several marathons, taking advantage of the mania for the sport among China’s growing middle class.