By Luo Guoping and Song Shiqing 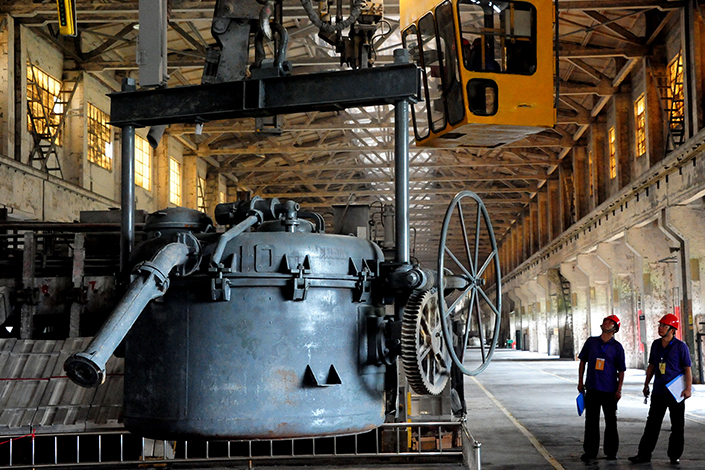 A rumored megamerger of Aluminum Corp. of China Ltd. and Sinosteel Engineering and Technology Co. Ltd. would extend a Chinese government campaign to consolidate the companies under its direct control. Above, workers inspect a piece of machinery in an Aluminum Corp. plant in the Guangxi autonomous region in September 2012. Photo: IC

Two Chinese state-owned metals giants suspended trading of their respective shares as they planned for “major” events, sparking speculation that they may become the next megamerger under China’s drive to reduce the number of national state-owned enterprises (SOEs).

The two companies have a combined market value of more than $18 billion, but Chalco is far larger than Sinosteel.

Several sources close to Sinosteel denied the possibility of a merger, saying the halts on the same day were just coincidence. A source with knowledge of the matter told Caixin that Sinosteel’s halt may be related to the company’s plan to give shares to some of its creditors in exchange for reducing its large debt load, under a government debt-for-equity program to rescue heavily indebted SOEs.

If it comes, such a megamerger would extend a Beijing campaign launched in 2015 to consolidate companies under its direct control and reduce the number of big SOEs. The consolidations will accelerate this year in bid to create corporate giants that can compete globally, according to previous statements from officials at the State-Owned Assets Supervision and Administration Commission (SASAC), which supervises SOEs under the central government’s control.

In a similar case that occurred in June, China’s largest coal producer and a major power generator requested a halt in trading of their respective shares on the same day. Two months later, the merger between Shenhua Group Corp. Ltd and China Guodian Corp. was approved by the SASAC.

The SASAC now supervises about 100 companies, but a knowledgeable source told Caixin in July that it wants to reduce that number to about 80.

Sinosteel mainly provides contract services for companies in mining, metallurgy, power and the coal chemical industries. According to its latest financial results, the company generated 3.6 billion yuan ($552 million) in revenue in the first half of 2017, down 10%, while its net profit rose 7.8% to 253 million yuan.

Chalco is the only large company in China’s aluminum industry that is engaged in the whole value chain, from exploration and mining to logistics and sales of the lightweight metal.

As the price of primary aluminum and alumina in China grew sharply this year, the company posted strong half-year financial results. Its first-half profit surged 300% to 1.6 billion yuan, while revenue rose 83% to 91.6 billion yuan.