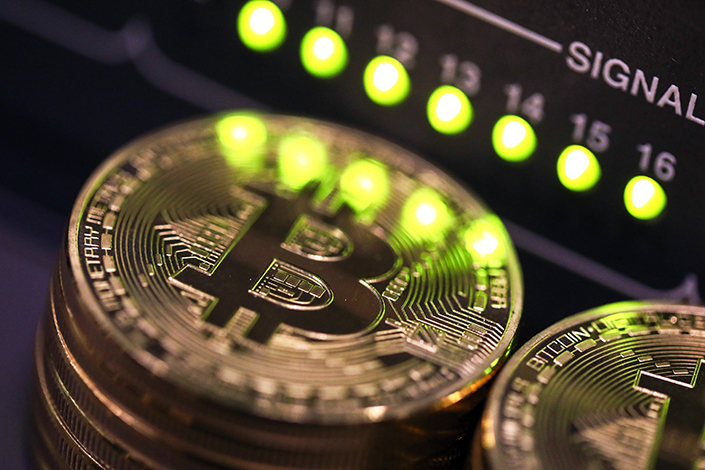 The price of bitcoin has steadied in the wake of its biggest drop since June as investors and speculators reappraised the outlook for initial coin offerings (ICOs). In China, ICOs have surged in popularity this year, raising $398 million worth of new virtual currencies during the first half of 2017. Photo: Visual China

China’s recent ban on cryptocurrency crowdfunding should not deter future research on blockchain technology that backs those “coins,” the country’s central bank said.

Last week, China became the first country to outlaw raising funds through virtual currencies that are built on this young and more secure computing technology. The People’s Bank of China (PBOC) and six other regulatory bodies deemed so-called initial coin offerings (ICOs) illegal, leading to the almost immediate closure of at least two-thirds of the country’s 60 ICO platforms.

Sun Guofeng, head of the PBOC finance research institute, defended the ban following some criticism that the move was extreme. It was the first time the central bank explained its policy stance on the record in public.

He argued that blockchain is not — and should not be — just about cryptocurrency. Outlawing ICOs should not stop financial-technology firms from researching and developing blockchain technology that can be used in a wide array of applications unrelated to cryptocurrencies, he added.

In China, ICOs had surged in popularity this year, raising 2.6 billion yuan ($398 million) worth of new virtual currencies during the first six months of 2017, according to a government-backed study. 105,000 investors participated in 65 ICOs during the same period. That was 20% of the global total.

Eye-catching deals include a July offering by PressOne, a content-distribution platform based on blockchain infrastructure, which raised 520 million yuan worth of bitcoins and other virtual currencies from 14,000 investors, making it the largest ICO in China.

The fundraising phenomenon grabbed headlines because of both the astronomical gains in value that attracted unsophisticated mom and pop investors and scandals including rumors of market manipulation.

Sun also said that regulatory sandboxes, which allow firms to test out new innovations under controllable limits, are not suited for widespread use in China.

Regulatory sandboxes are useful for encouraging startups to develop financial technology when there is limited motivation to do so, he said. However, the Chinese market is very large, and it is relatively easy for fintech firms to turn a profit, thus the inherent motivation is high.

Under these circumstances, if a regulatory sandbox is implemented, fintech companies of all sizes would likely flock in, but it might not be able to accommodate so many institutions, Sun said.