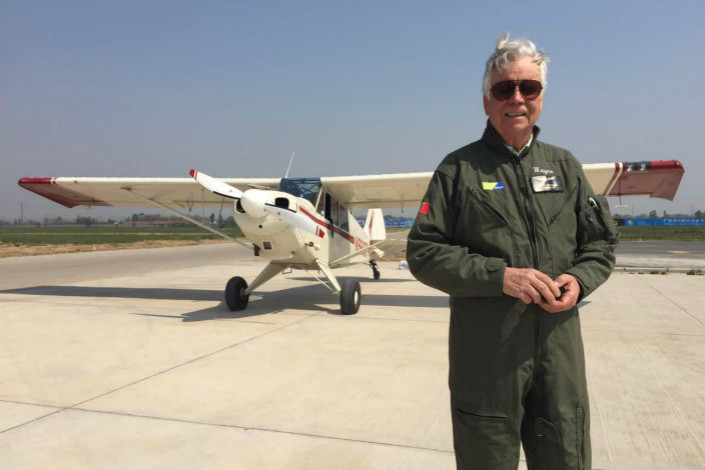 (Beijing) — As a longtime private aviator, Wayne Mansfield has big hopes in China for general aviation, a category that includes skywriting and operating private planes and jets, among other things. But Beijing’s efforts to build up a major new industry have yet to really take off for a number of reasons, mostly related to the newness of services that would have been considered an extravagance as recently as a decade ago.

China’s airspace has traditionally been mostly controlled by the military, the legacy of a period when the nation was relatively poor and commercial aviation, which includes major airlines, was nearly nonexistent. But as the economy has soared over the last two decades and living standards have risen, Beijing has moved to develop both the commercial and general aviation spaces.

Mansfield’s company, Clear Sky Ltd., is taking several steps to help and develop the sector. One has seen the company try to sell several proven small-aircraft designs with U.S. owners to Chinese buyers. One of its previous deals fell through, but another involving the sale of rights to make a six-seat aircraft called the Sea Wolf Amphibian has moved ahead. Those rights carry a price tag of about $45 million, and a potential Chinese buyer has already put down a deposit.

During a recent trip to Beijing, Mansfield sat down with Caixin to talk about the industry in China and its future development. Below are excerpts from that interview.

Caixin: Tell us about yourself, your history and how you got into the business.

Mansfield: I was born into a flying family. My maternal grandfather started flying in 1929. My father loved aviation and hung around airfields as a kid. My parents met on an airfield. In 1939, they bought a plane together rather than get married. World War II came along, my dad ended up (serving) two and a half years in the Pacific. He came home and upgraded his flying license to a commercial license. In 1952, he and my mother scraped together $200 (equivalent to about $1,800 today) to buy a World War II surplus Boeing-Stearman biplane. They took an agricultural spring system out of the airplane, and they traded it for an aerial banner. In March 1953, we launched our first aerial media flight. We’ve been in the business ever since. Aerial media is the production and towing of aerial banners and writing of messages with white vapor in the sky — skywriting.

How did you get involved in China?

I came to China to investigate what was going on with aviation, to look at the possibilities of expansion for our aerial media business, and also to look at ways to promote our other aviation interests. This is my 16th trip. I’m fascinated with what’s going on here. For the past couple of years, we’ve worked with Blue Legend (organizer of the Zhengzhou Airshow in Henan province). We’ve partnered up with them to fly aerial banners at the air show each year in the spring. This last year, it was a very large event. We were the first foreigners allowed to overfly and orbit a Chinese city.

What is the state of general aviation in China?

There’s been a great deal of discussion about opening the skies to allow general aviation to flourish and for the development of aircraft manufacturing. President Xi announced general aviation would become one of the leading industries in China. It was said it should top $150 billion in gross product by 2020.

Where do things stand now?

When I first came, I found that most people were dreaming, but few people were actually doing. It’s been a difficult start, but the intention is certainly there. What is needed is a harmonious and synchronized system to bring aviation culture to China. People are making a stab here and there to buy an airplane company or open a flight school. In order to have a good system of aviation, you need to have aviation culture. You can’t start at the end. You need to start at the beginning.

How are you hoping to contribute to the sector’s development?

We know that there’s a target, a goal of developing general aviation in China. I don’t believe you can just send people off to flight school to make this work, because you’re starting at the end, not the beginning. In America, aviation is embedded in our culture; it’s everywhere — movies, magazines, TV. Most any American kid can go to a local airport and get a plane ride, watch planes fly. You can go and take a flight lesson anywhere, local airfields. Everyone knows about aviation.

Access is more limited in China; this is a newer activity. My partners and I feel there needs to be a way to engrain culture starting with younger children. We’re in the process of developing a program. We call it Dragon Aviator, for 8- to 15-year-olds. It will be a game-based learning system. We’re looking for Chinese partners who want to invest in this program. We would see this as people starting with the Dragon Aviator program, moving on to Air Cadets, basically like the Boy Scouts in America. Then they would move into being Primary Flight Students. We feel that the flight students should be involved in going to the factories where they manufacture airplanes to learn how these things are made. What we don’t want is for the aviation culture in China to be a nation of button-pushers. Anyone can push a button.

What’s the status of the Dragon Aviator program?

I think we could have it ready in a year. It’ll move when we have the appropriate investors.

What are some of the bigger issues holding back general aviation in China?

The civil aviation authorities are moving carefully to make certain the system works well and that people are fully prepared to fly and operate airplanes. The airspace is slowly opening. There’s definite progress, but the progress is slow. I think the regulators understand what the challenges are. They don’t want to move ahead in a risky fashion.

What’s the scene like for air shows now in China?

The air show business is thriving in China. There are shows all the time, round the year except maybe in the deep winter months. It’s an ever-increasing business. People are fascinated with aviation. They go to air shows to see pilots perform. People are fascinated; you get huge crowds at some of these shows.

How would you rate the quality of these air shows?

The air shows are excellent; they’re really well done. In the last two years I’ve watched the Zhengzhou Airshow grow. The first year I went, September 2015, I was really impressed. They brought in some of the best people from around the world. In April and May of 2017, it was phenomenal. You had the top aerobatic teams from around the world competing, not only doing aerobatic flying but doing formation aerobatic flying of up to six airplanes in a group doing complex maneuvers in tight formation. You had people from South Africa, Australia, the U.S, France, Britain, Germany, literally all over the world. You really have the cream of the crop coming to Zhengzhou.