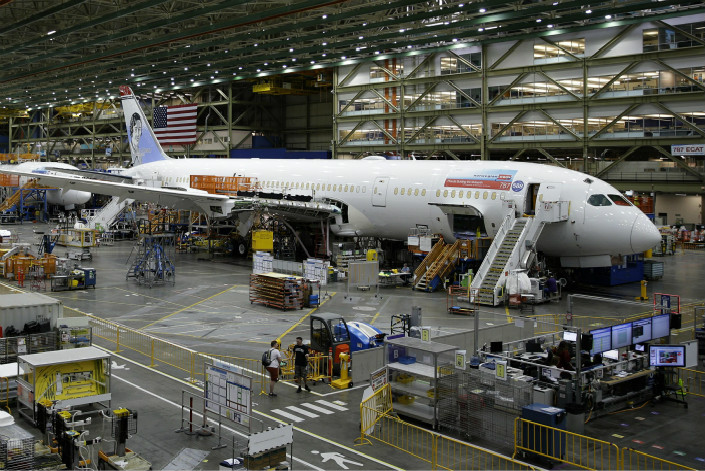 U.S. aviation giant Boeing, maker of the Boeing 787 (above), forecasts that China will make up 20% of global demand for new airliners within 20 years. Photo: IC

China’s commercial airlines will likely buy up to 7,240 new aircraft worth about $1.1 trillion over the next two decades to meet the burgeoning travel demands of a growing middle class, a Boeing Co. report said Wednesday.

In the report, the U.S. aviation giant revised its China aircraft demand forecast higher by predicting a total sales level for the next 20 years that’s 6.3% above its 2016 estimate.

China will account for almost 20% of global demand for new airliners within 20 years, the report predicted. It forecast total worldwide sales for the period at 41,030 aircraft, worth up to $6.1 trillion.

According to Boeing, single-aisle passenger airliners will continue to be the most popular aircraft in China for domestic and regional fleets. About three-fourths of all orders in the coming decades are expected to be single-aisle aircraft.

Additionally, the company expects China demand over the period to include orders for 1,670 wide-body airliners. Passenger airlines will likely buy small and midsize wide-body aircraft, while cargo operators are slated to snap up larger aircraft.

Boeing is currently gearing up to compete against its chief rival Airbus SAS for future Chinese orders by building its first China production facility in Zhoushan, Zhejiang province. Work on the new plant began in March.

In addition to European plants, Airbus operates a Tianjin factory and last year started building a new facility nearby for finishing work on wide-body A330 airliners. The company is also building a helicopter plant in the northeastern city of Qingdao.

China’s homegrown aircraft maker Commercial Aircraft Corp. of China is also in the competition. The state-owned company’s C919 passenger airliner made its maiden flight in May.

Meanwhile, China’s airlines may have to compete harder for travelers in the future as the nation’s railroad plans to raise the top speed for bullet trains to 350 kph (217 mph).

But Tinseth does not expect faster bullet trains or even highway travel options to have much of an influence on China’s commercial aviation business.

“The aviation market share taken away by highways could shrink to less than 1% from the current 1% to 2%,” he said. “That is mainly because most airlines have rearranged their fight routes.”