By Denise Jia and Wei Yiyang 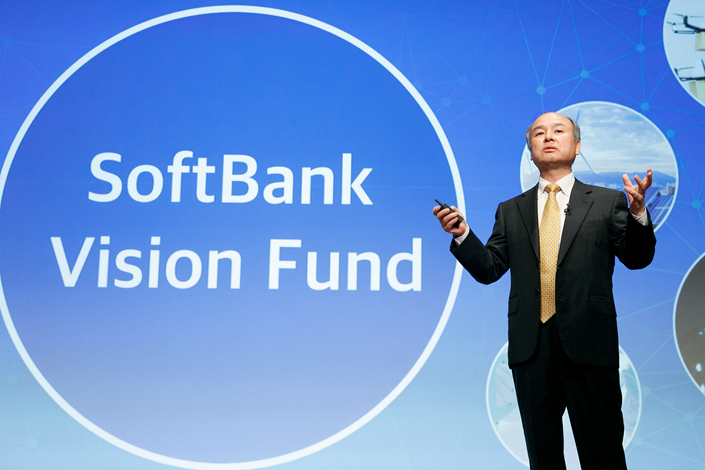 Japanese telecom and internet conglomerate SoftBank Group Corp. has surfaced as a potential cornerstone investor in Zhong An Online Property and Casualty Insurance Co. Ltd., which is looking at an initial public offering in Hong Kong. Above, SoftBank Chairman Masayoshi Son speaks at a May 10 news conference in Tokyo. Photo: Visual China

The company — whose largest shareholders include Ant Financial Services Group, an affiliate of Alibaba Group Holding Ltd.; social media kingpin Tencent Holdings Ltd.; and China’s second-biggest insurer, Ping An Insurance — hopes to raise $1 billion to $1.5 billion. A timetable for the proposed IPO has not been announced.

The Japanese telecom and internet conglomerate SoftBank Group Corp. has surfaced as a potential cornerstone investor that might be willing to buy a $500 million stake, sources who asked not to be named told Caixin.

The investment community is divided over the potential value of ZhongAn, which reported a sharp decline in net profits from 2015 through 2016. Although the insurer is said to show strong potential for profits over the long term, it’s expected to post a loss for 2017.

One of the project’s underwriters, UBS Group, has pegged the company’s value at up to $12.9 billion.

Some potential investors think the company is worth far less than the UBS estimate. But analysts told Caixin that a high valuation is justifiable based on ZhongAn’s future earnings potential.

Shanghai-based ZhongAn has grown rapidly since launching four years ago. It now claims to be China’s largest insurer in terms of customers, with 492 million enrolled in plans, as well as in terms of policies, with about 7.2 billion sold.

The company got started by insuring online merchants against losses incurred when shoppers were dissatisfied with delivered products that were purchased online. The company later expanded into several other business areas, and now sells policies protecting a variety of consumer losses in categories as diverse as airline flight delays and cracked cellphone screens.

UBS said it expects ZhongAn to post a 174 million yuan net loss for 2017 due to a “long-term investment.” But the underwriter is forecasting profits of 704 million yuan and 1.68 billion yuan for 2018 and 2019 respectively.

ZhongAn’s largest shareholder is Ant Financial, which controls a 16% stake. Tencent and Ping An each has a 12% stake. The insurer’s founders are Alibaba Executive Chairman Jack Ma, Tencent CEO Pony Ma, and Ping An Chairman Ma Mingzhe.