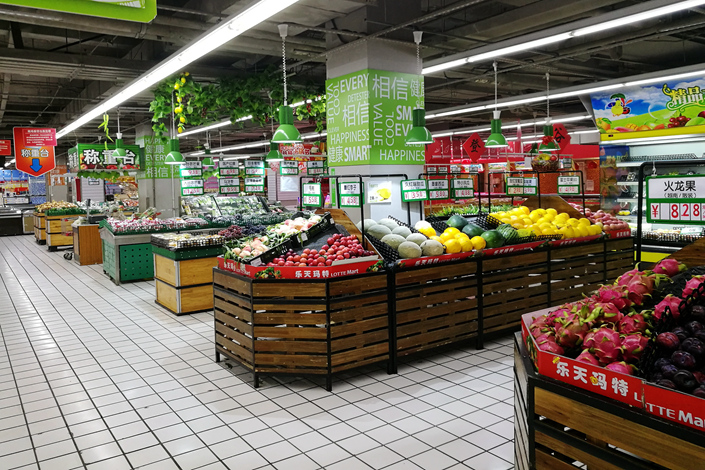 A Lotte Mart store in Beijing's Chongwen district has little business on Aug. 4, as Chinese customers continue boycotting the South Korean chain over its decision to provide property to the South Korean government for the installation of a U.S. anti-ballistic-missile system. Photo: Visual China

Struggling South Korean retail giant Lotte Group has decided to sell many of its stores in China — its largest overseas market — after consumer sentiment soured amid Seoul’s decision to host a U.S. anti-ballistic-missile system.

The move only affects Lotte Marts — the brand’s hypermarkets, which sell supermarket items such as groceries, as well as electronics, clothing and other goods. China had 112 such stores at the end of June, and 87 have since been closed, group spokesperson Han Bo-young told Caixin.

The potential sales don’t include Lotte’s China-based department stores, Han said. China had five such stores at the end of June.

Consumer ire toward Lotte rose in China after the company agreed to provide land on a golf course to the South Korean military to deploy the American Terminal High Altitude Area Defense (THAAD) anti-missile system, which Beijing opposes due to security concerns. Chinese citizens have protested by not shopping in Lotte stores, while local authorities have upped their safety and sanitation inspections of Lotte Marts.

Lotte saw its China retail business plummet amid the backlash, with revenue generated from hypermarkets in China down nearly 95% to 21 billion won ($22 million) in the second quarter. Overseas Lotte Marts, 66% of which were in China, reported a loss of 55 billion won.

Since March, Lotte has poured $620 million toward repaying debt and reviving business for its China unit, according to the Seoul-based Yonhap News Agency. The initiative has produced little results.

Lotte is not the only company that has suffered during the recent spat. Other South Korean firms, particularly in the retail, automobile and tourism sectors, have experienced weaker-than-usual business.

Convenience store operator E-Mart Inc. has sold five of its six outlets in China to peer C.P. Lotus. In late August, Hyundai Motor Co. announced it had halted all four of its operational China plants.

From January through June, South Korean-brand auto sales in China totaled 430,900 units, accounting for 3.83% of the Chinese market, down from 7.35% last year, according to the China Association of Automobile Manufacturers.

Chinese consumers have rallied against foreign companies in the past in response to geopolitical conflicts. In 2012, anti-Japan protests led to boycotts of Japanese automobiles and other products due to a territorial dispute over islands in the East China Sea.