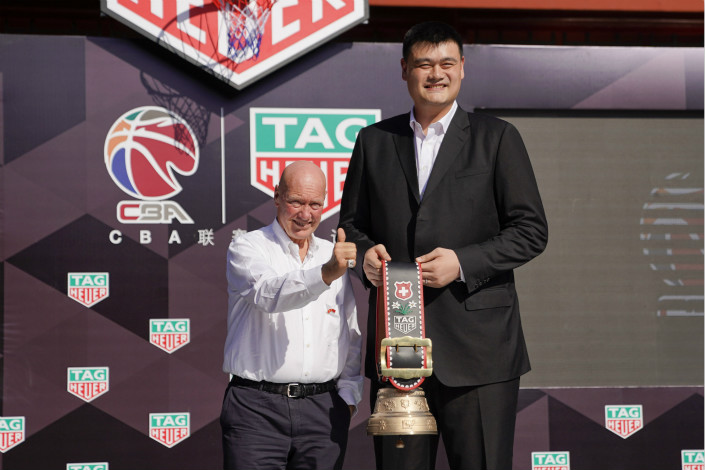 Two years after suing the Chinese Basketball Association (CBA), the luxury Swiss watchmaker is making amends with the league — and resuming its role as the CBA’s official timekeeper.

The two parties signed a new agreement Monday, but did not reveal the size of the deal.

The move marks a remarriage of sorts for the league and the LVMH-owned brand. In September 2015, TAG Heuer SA inked an exclusive timekeeper sponsorship deal spanning 2015 to 2017 with Infront Sports & Media, the then-marketing agent of the CBA. But two months later, TAG Heuer discovered that branding for Swiss rival Tissot was appearing on some CBA tickets and marketing materials.

TAG Heuer said in a statement at the time that Infront had abruptly terminated the deal, and had given no reason.

TAG Heuer then announced it was suing the marketing agent in Beijing. Infront responded by announcing Tissot as the league’s exclusive timekeeper.

But as the subsequent two years ticked along, there were wrinkles in Tissot’s timekeeping. Audiences at the games repeatedly complained that the timers were delayed or had temporarily stopped, and may have affected game results.

It was unclear whether the problems were with CBA personnel or with the timekeeping equipment.

But in March 2017 — after Chinese basketball icon Yao Ming became president of the CBA — the league punished several staff members who had failed to notice the delayed clocks, again with suspicions that the indiscretions had caused unfair game advantages.

In February, TAG Heuer won its lawsuit against the CBA, and was awarded what media reported as around 1 million yuan ($152,000) in damages.

But bygones appear to be bygones — and TAG Heuer is slated to keep the time for the upcoming season, which kicks off on Oct. 21.

Company CEO Jean-Claude Biver told Caixin that the company has rich timekeeping experience, as it has supported the Olympic Games since 1932, as well as many other athletic events, including tennis, car racing and skiing.

TAG Heuer is also the official timekeeper of the Chinese Super League, the premier men’s soccer league in China, and is considering opportunities with other sports in China, including volleyball and table tennis, Biver said.

The sizes of those latter two deals also haven’t been disclosed. Jiang Jian, CBA general manager of operations, said that now is not the time to speak to the media about the issue, but said that he felt optimistic.