By Denise Jia and Chen Lixiong 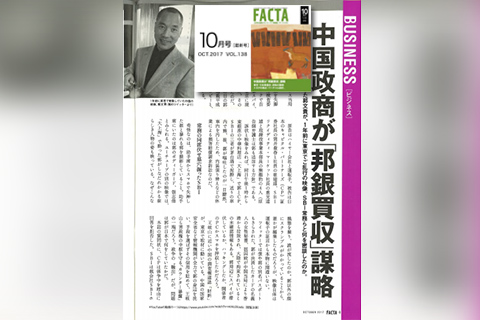 Japanese investigative magazine Facta reports in its latest issue on fugitive businessman Guo Wengui’s alleged drinking scandal in Tokyo during discussions to acquire a Japanese bank. The talks have since collapsed. Photo: Caixin

Chinese fugitive billionaire Guo Wengui’s attempt to acquire a Japanese bank was dealt a fatal blow after a limo company sued him and two other businessmen, claiming they had vomited in the vehicle during a drunken spree, an investigative magazine reported.

Guo was trying to buy Tokyo-based Shinsei Bank at the time. High-flying Anbang Insurance Holdings, whose chairman, Wu Xiaohui, has not been heard from since June 14, is now known to own a stake in Shinsei.

Caixin has learned that Guo made a trip to Tokyo in August 2016 and met with two business partners. In January, one of these partners — Capital Partners Securities Co. Ltd. — proposed acquiring the controlling stake in Tokyo-based Shinsei Bank, and Guo showed an interest in the possibility, Caixin learned.

J.C. Flowers & Co., a U.S. private investment firm, had reportedly been willing to sell its stake in Shinsei Bank. As of March 31, “a group of investors, including affiliates of JC Flowers & Co,” holds 21.39% of Shinsei Bank’s outstanding common shares, excluding treasury shares, the bank said in its recent annual report.

Guo had intended to make the investment through ACA Investment Fund, a fund that Guo jointly created with the Abu Dhabi royal family, Caixin learned from sources.

Representatives of J.C. Flowers and Abu Dhabi held talks in London this May and June, but no deal on the bank was reached because they couldn’t agree on a price, according to a source of Capital Partners Securities who is close to the matter.

But a recent article by Japanese monthly investigative magazine Facta said the possibility of such a deal was “100% gone” after Guo and two other people were sued in Japan for allegedly damaging a limo after they got drunk and threw up in the vehicle.

The magazine said that on the night of Aug. 31, 2016, Guo — using the false name Zhang Zhiwei — got drunk at a Chinese restaurant in Tokyo and left in a limo with the other businessmen, including executives from Capital Partners and SBI Liquidity Market Co. Ltd., according to the article.

The three then vomited profusely in the limo, which required that it be taken out of service to be cleaned. The limo company then sued the passengers for about $66,000 for vehicle damages. The case went to a local court in Tokyo, and the trial started in July. The plaintiffs only recently learned that one of passengers was Guo after a series of videos on the incident were released on a social media channel.

Guo left China in August 2014 to avoid investigations into a series of suspected bribery, embezzlement and fraud cases allegedly linked to him and his companies.

On Sept. 20, a New York state court judge dismissed a lawsuit filed against Guo by a Hong Kong-based hedge fund, according to Forbes. The judge ruled that a state court was not an appropriate venue for the lawsuit.

Capital Partners President and CEO Toyoharu Tsutsui, one of the defendants in the limo lawsuit, told Caixin that he didn’t know Guo and had never participated in any talks between ACA Investment Fund and Shinsei Bank.

“How could I have any relations with such an anti-government businessman?” Tsutsui said.

Tsutsui said only that Shinsei Bank is a shareholder of Capital Partners. Tsutsui told Caixin that four or five years ago, he had “previously helped a client research a Shinsei Bank acquisition.”

In another development, Anbang Insurance Holdings, an affiliate of China’s insurance giant Anbang Insurance Group, was included in the latest list of Shinsei Bank’s major shareholders. It was listed as Shinsei’s 11th-biggest shareholder with a 1.55% stake.

Shinsei said it did not see this shareholder when checking in September 2016, indicating Anbang is a newcomer.

Anbang’s chairman was Wu Xiaohui, but not since June 14, when the company said he could no longer perform his duties for “personal reasons.” He was believed to be under investigation by authorities, Caixin reported earlier.

Anbang is China’s third-largest insurer with 1.97 trillion yuan ($297 billion) in total assets. It has been on a buying spree in recent years, acquiring overseas insurers, banks and hotels, including the landmark hotel Waldorf Astoria in New York City.

The exact time and reason why Anbang started to invest in Shinsei is not clear yet. But in March 2016, when Wu was competing with Marriot International Inc. to acquire U.S. hotel chain Starwood Hotels and Resorts Worldwide Inc., a private equity fund under J.C. Flowers was a partner of Wu. (Marriott purchased Starwood in September 2016.) In 2014, when Anbang acquired Belgian insurance company Fidea, it purchased the company from J.C. Flowers & Co.

Editor’s note: A Caixin report in 2015 revealed how Guo and Ma Jian, at the time a vice minister of state security, formed a close alliance, using national security power to meddle in business deals. In response to Guo’s subsequent attacks on Caixin, Caixin filed lawsuits against Guo and his companies, accusing him of fabricating and disseminating false information.

This story has been updated to include further details about the incident and the involvement of Anbang Insurance Holdings in Shinsei Bank.