By An Limin, Zhou Tailai and Li Rongde 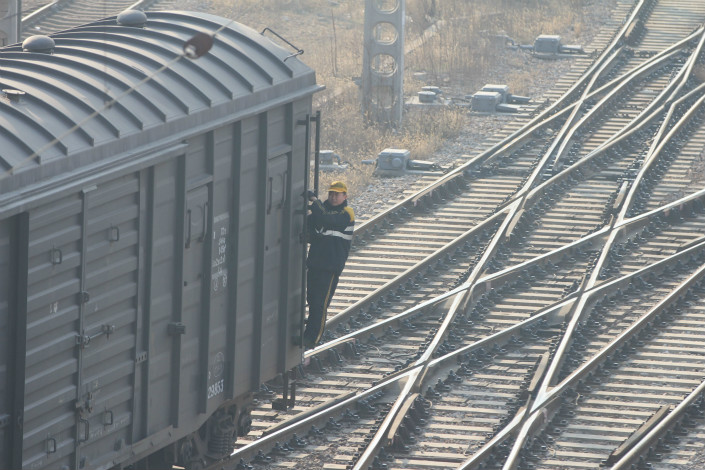 Only 10.2% of the 2.7 billion tons of cargo that is moved in or out of the Beijing-Tianjing-Hebei region every year is transported by rail. Nearly 85% is delivered by motor vehicle, contributing to the region's severe air pollution problem. Photo: IC

China’s environmental protection watchdog has proposed that the country’s rail monopoly lower freight fees to encourage the use of rail over trucking services in order to reduce the worsening air pollution in northern China.

The Ministry of Environmental Protection did not specify by how much China Railway Corp. should cut freight charges to attract more business. “But if the rail operator could draw in an additional 5% away from trucking services, it would help tackle air pollution in the Beijing-Tianjin-Hebei Province region,” the ministry said in a recent proposal seen by Caixin.

The document has been sent to the State Council, the country’s cabinet, for approval, according to one ministry official who was briefed about the proposal.

The Beijing-Tianjin-Hebei province region, which is home to nearly 10% of the country’s population and six of its most polluted cities, is the most polluted part of China. Its air quality deteriorated over the first eight months of 2017. The area’s average concentration of PM2.5, the fine particles of pollution that can result in respiratory and other health problems, rose 10% to 65 micrograms per cubic meter of air, according to the MEP. That was twice the level considered safe by the World Health Organization.

A similar increase in the level of PM10, another major air pollutant that causes lung and heart disease, was also recorded over the same period, the ministry said.

Motor vehicle emissions account for 24% to 44% of the pollutants in the air, most of which are fine particulate matters consisting of nitrite produced via the chemical reaction between nitrogen oxide and hydrocarbons in the air.

Some 2.7 billion tons of cargo gets transported in and out of the Beijing-Tianjin-Hebei region each year. Nearly 85% of it is moved by motor vehicle, particularly diesel trucks. Trains take around 10.2%. The rest gets handled by cargo planes or ships, according to the ministry.

Cargo trains less popular with freight companies because rail freight operators cannot deliver goods from door to door, according to a ministry official. Businesses also shun rail freight because it is more expensive than trucking in China, unlike in many other countries, according to the official who asked not to be named because he was not authorized to comment on the proposal.

It costs 180 yuan ($27.35) to transport 1 ton of iron ore from Tianjin’s Huanghua Port to Handan Iron & Steel Group Co. Ltd. in southern Hebei province, according to a study by the environmental protection ministry. It costs about half as much to make the same delivery by truck.

The ministry also proposed pricing reform at China Railway to boost the efficiency of cargo train services by cutting the number of empty trains on return trips.

China Railway did not immediately respond to Caixin’s queries about the proposal.