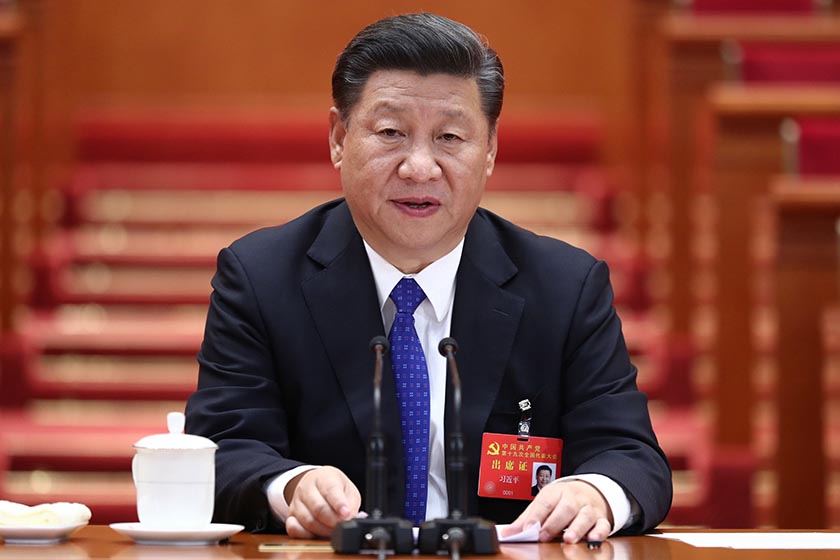 When China's modernization is completed at some point before 2035, the country will emerge as a global leader "in terms of composite national strength and international influence," General Secretary Xi Jinping said. Photo: Xinhua

The head of the Communist Party of China Xi Jinping has declared a "new era" for Chinese socialism marked by an effort to close the gap between "the people's demands for a better life and unbalanced, insufficient development."

Xi's call to action — and promises of results — were the focus of a major policy address as he opened a once-every-five-years party congress Wednesday in Beijing.

Some 2,338 delegates and select guests attended the opening session of the 19th National Congress of the Communist Party of China. Among the delegates were top party veterans including Xi’s predecessor Hu Jintao and former party General Secretary Jiang Zemin.

The delegates are expected to elect a new central committee, which in turn will choose the members of the Politburo and the Standing Committee of the Politburo during the week-long gathering.

During his three-and-half-hour address, Xi said China's brand of socialism has crossed a threshold into a new era.

"This is a new, historic juncture in China's development," he said.

Guided by the party, Xi said China will build on its past successes and continue in "a new historical context to strive for the success of socialism with Chinese characteristics."

China's modernization effort is to be "basically realized" between 2020 and 2035, Xi said. The country will thus rise to the status of "global leader in terms of composite national strength and international influence," he said.

Xi touched on a wide range of domestic and foreign issues from the Belt and Road, an overseas trade and infrastructure-building initiative he's been touting since 2013, to financial market regulation at home and an ongoing anti-corruption campaign. He also delivered a stern warning aimed at Taiwan independence advocates.

Here are some key takeaways of his address:

Xi's thoughts on a new era underscore the party's intent to uphold and develop socialism with Chinese characteristics. The overall task involves realizing China’s modernization effort and completing the government’s stated goal of the great revitalization of the Chinese nation.

China will need another 30 years to fully develop and emerge as a modern socialist country, Xi said.

China is determined to maintain independence in terms of foreign policy while working to maintain peace, Xi said. China will never promote development activities that undermine the interests of other nations, he said.

Neither will China yield its legitimate rights. Xi said no one should expect China to swallow bitter fruit by working against its own interests.

Xi said his nation will not close its door to the international community but instead open itself wider. The Belt and Road initiative, for example, will be the focus through which China nurtures two-way trade on a level playing field in terms of cooperation and market access.

The party is committed to "correctly" implementing the "one country, two systems" principle, Xi said. China will firmly take control of all affairs in Hong Kong and Macau according to the nation's constitution as well as the basic laws of Hong Kong and Macau, he said.

China will continue to consolidate and develop the state-owned business sector while supporting and guiding companies outside the state sector by giving the market a more decisive role in resource distribution, he said.

Xi said the party will push for market-oriented interest rate and foreign exchange reform, as well as improve financial oversight in order to guard against systematic risks.

China will not change its rural land leasing policy over the long term, Xi said. But it will extend lease terms another 30 years beyond each contract's expiration.

The party will deepen state supervision reform to strengthen top-down and bottom-up oversight of the party's governing structure, Xi said. It will also extend pilot projects for supervisory committees at the national, provincial, city and county levels in order to streamline cooperation with the party’s internal discipline agencies.

Xi announced that the party will form a Central Leading Group for Comprehensive Governance tasked with promoting justice, scientific legislation and legal order among the public.

Xi also said the party will uphold its basic principle on religion by taking an active role in guiding religious groups to conform to the nation's socialist system.

The party is committed to fighting air pollution, Xi said, and plans to create more jobs through proactive policies that improve the job market and raise wages. Moreover, he said, the party plans to eradicate poverty in rural areas by 2020.