By Lin Yunshi and Wu Gang 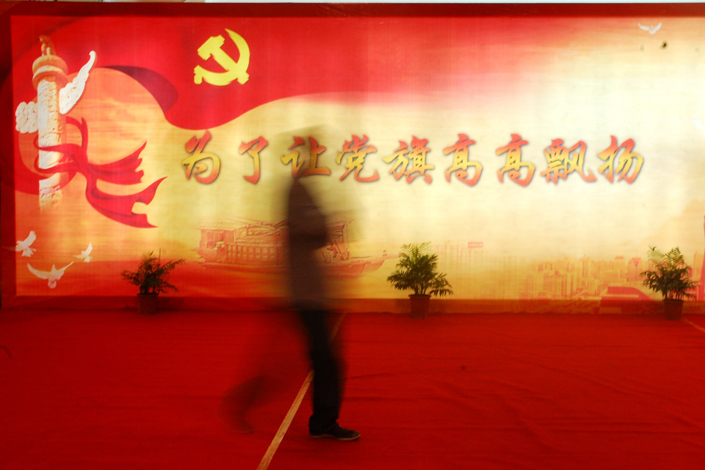 An official exhibit of the Communist Party's achievements in Beijing hinted that five unnamed members of the Central Committee may be in as-yet-unrevealed trouble. Above, a passerby walks beside a display reading "Let the party flag fly high" at a Hangzhou anti-graft exhibtion. Photo: Visual China

The Communist Party announced 12 Central Committee officials were expelled after a plenary meeting last week, boosting the count of disgraced officials in the current term to 35.

Most of the 12 people had already reportedly been given this highest party disciplinary punishment, including Sun Zhengcai, former party chief of southwestern China’s Chongqing municipality, and Xiang Junbo, former head of the China Insurance Regulatory Commission.

Only one official — the former head of the Ministry of Justice, Wu Aiying — was newly disclosed as having been removed from the party.

However, an official exhibit held on Sept. 25 in Beijing to demonstrate the party’s economic and social accomplishments over the past five years disclosed that 40 members and alternate members of the Central Committee have been investigated or punished for corruption.

The Beijing exhibit was attended by Chinese President Xi Jinping, who is also the top leader of the Communist Party.

But Caixin has found that four officials who were on top of the list of the 18th Central Committee alternate members were not among the 11 promoted to full membership.

There have been no reports that the four people have been put under any investigation.