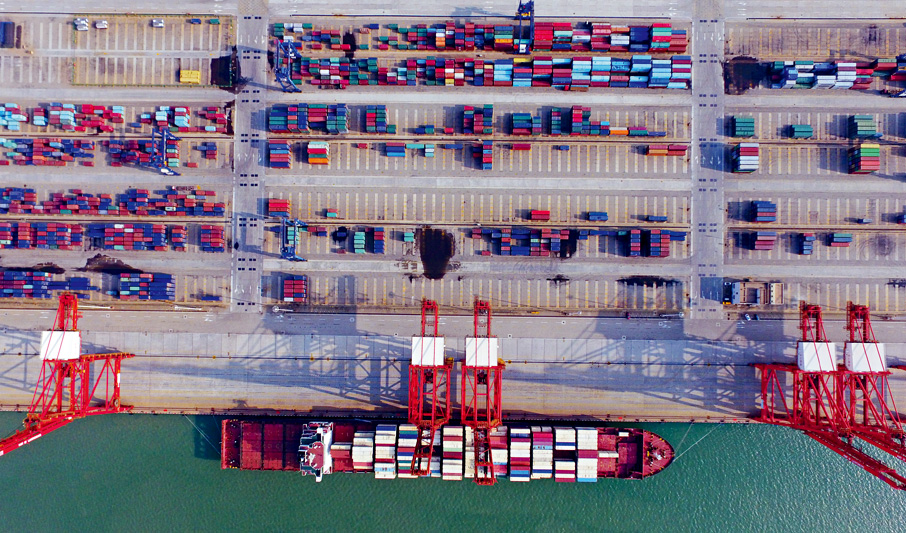 A central government campaign to consolidate port operations has gained steam since August, when 18 provincial-level regions with ports were ordered to ramp up their efforts. Above, the port in Lianyungang, Jiangsu province, is seen on June 24. Photo: Visual China

Busy ports linking “the world’s factory” and the rest of the world are now targets of a Chinese government consolidation campaign that previously spurred high-profile mergers among state-owned shipping and logistics companies.

By consolidating port operations according to administrative regions such as provinces, Beijing hopes to reduce competition and promote economies of scale. Officials also expect consolidated ports to be managed more efficiently.

The campaign, which mirrors a state-owned enterprise (SOE) reform movement underway since 2015, has gained momentum since August, when 18 provincial-level regions with sea and-or river ports were ordered to ramp up consolidations.

The Ministry of Transportation’s port streamlining order called on provincial-level authorities to learn from the success of Zhejiang province, where all area ports were merged in 2015 and now operate under a single platform. The merger adhered to a “guided by the government but led by the market” principle that the ministry said other provincial authorities should adopt.

Plans for single-platform port systems have since been announced in Jiangsu, Liaoning and Hainan provinces and the Guangxi Zhuang autonomous region. At least five other provinces, including Hebei, have also agreed to consider following Zhejiang’s example.

Industry experts expect Beijing’s effort to yield results, but not without a degree of bureaucratic tension tied to conflicting interests.

Some challenges stem from the fact that most ports are owned by local governments. Local government bureaucrats see ports as important assets with economic activities that affect their own work performance records, which in turn can factor into their career paths within China’s political system.

For example, bureaucrats in each of two neighboring administrative regions could resist if a regional port consolidation plan threatens to affect economic arenas they’ve separately controlled.

Port management officials in the municipality of Tianjin and neighboring Hebei have expressed dissatisfaction with a Transportation Ministry plan to consolidate their operations. Objections stem from the plan’s call for the Tianjin port to focus on serving container ships, while Hebei’s ports, including Caofeidian and Qinhuangdao, are to concentrate on bulk commodity shipping. The plan in effect would require that each local government give up some business areas under their control.

Nevertheless, industry experts who spoke with Caixin expect the ministry’s consolidation plan to take effect nationwide. And eventually, they say, each provincial-level area will be home to a single port operator.

“Consolidations in places such as Tianjin-Hebei may take more time,” said one expert who declined to be named. “But overall, the plan will be implemented.”

China’s port operations sector has grown rapidly since the early 2000s, when the central government decided to hand oversight of individual ports to local government entities and shift the responsibility away from the Transportation Ministry.

In 2003, one year after the handover was completed, the ministry reported nationwide port sector investment grew more than 73% to 24 billion yuan ($3.62 billion). And the investment spree continued through subsequent years.

“Around 2008, the throughput rate at ports began to slow,” said professor Xu Jianhua at Shanghai Maritime University. “But local governments were still competing to build ports, especially in the Bohai Sea area (which includes Tianjin) and along the southern coast. Overcapacity became apparent.”

Overcapacity led to fierce competition among ports. For example, a former Hebei port employee who asked to remain anonymous said several local ports in that area engaged in a price war over a one-year period beginning in July 2015.