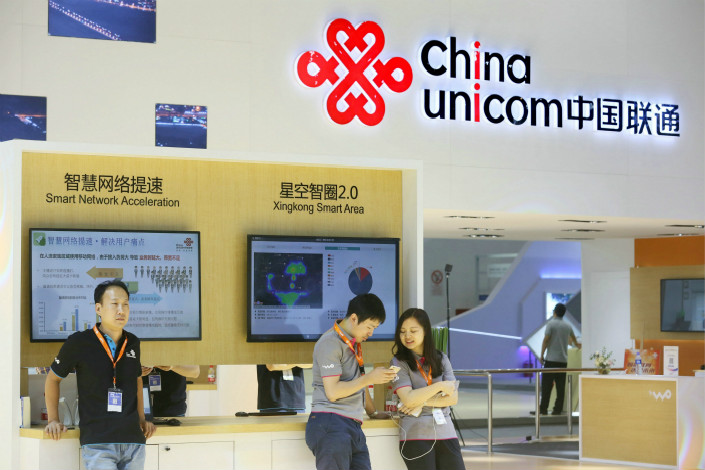 China Unicom has completed its sale of its Shanghai-listed shares to strategic investors as part of its mixed-ownership reform plan, multiple sources close to the transaction told Caixin.

Representatives from the company told Caixin that China Unicom had been continuously accelerating the sale process, but they were unable to confirm whether the sale had been completed.

The state-owned telecommunications company had said in August that it would sell 35% of its Shanghai-listed unit, China United Network Communications Ltd., to 14 investors, including Chinese internet giants Baidu Inc., Tencent Holdings Ltd., Alibaba Group Holdings Ltd. and JD.com Inc. China Unicom also has a Hong Kong-listed unit. At the time, China Unicom said it planned to sell 10.9 billion of its Shanghai-listed shares at 6.83 yuan ($1.03) each, for a total of 74.45 billion yuan.

The sale is part of a larger pilot program to streamline large state-owned enterprises by bringing in private capital. But a rule put in place by the China Securities Regulatory Commission (CSRC) in February said private-share placements should involve no more than 20% of a company’s original equity. China Unicom’s plan called for the placement of over 42% of its existing total equity.

The CSRC eventually decided to make an exception for China Unicom in order to support state-owned enterprise reform.

On Sept. 13, the State-Owned Assets Supervision and Administration Commission gave China Unicom the green light to transfer the over 1.8 billion shares it held in Shanghai-listed China United Network Communications to the China Structural Reform Fund Corp., and agreed to let China Unicom conduct a private placement involving not more than 9.037 billion A-shares. The fund was set up in August to support state-owned enterprise reform.

On Oct, 11, the CSRC gave final approval for China Unicom’s plan to sell its Shanghai-listed shares. Sources told Caixin that investors had already raised funds, and were waiting for the CSRC’s approval before delivering them.

With the entry of new shareholders, China Unicom’s leadership team is set to change. According to a Sept. 29 announcement, China Unicom will expand its board of directors from the current seven members to 13, including at least one professional accountant.