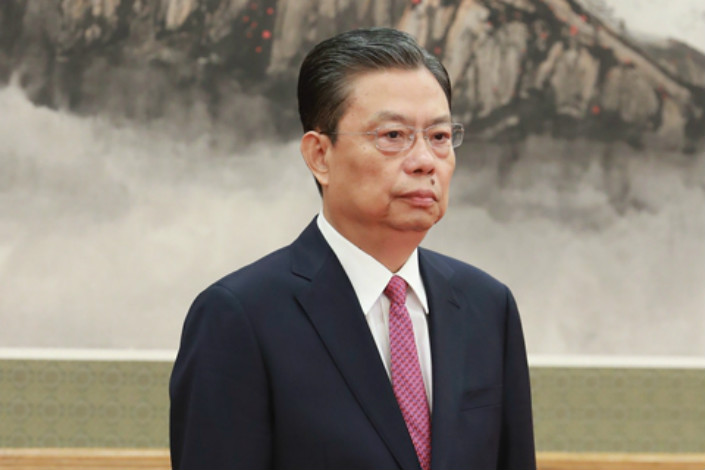 New Central Commission for Discipline Inspection head Zhao Leji rose through the party ranks working in Northwest China's Qinghai and Shaanxi provinces, and has served on the Politburo since 2012. Photo: China News Service

Four new deputies — including a troubleshooter tasked with an anti-corruption campaign in northwestern China last year — have been named to work under Zhao Leji at the Communist Party's Central Commission for Discipline Inspection (CCDI), according to the state-run Xinhua News Agency.

Zhao, 60, was appointed to head the CCDI as well as serve on the seven-member Standing Committee of the party’s Politburo during the 19th National Party Congress which concluded in Beijing on Tuesday.

By taking the helm as the CCDI's new general-secretary, Zhao succeeded the agency's previous anti-corruption chief, Wang Qishan. His appointment was announced Wednesday at the plenary session of the party’s newly elected Central Committee.

Zhao has served on the 25-member Politburo, which is overseen by the standing committee, since 2012. He rose through the party ranks working for decades in Northwest China’s Qinghai and Shaanxi provinces.

Newly appointed as one of CCDI's eight deputy secretaries was Chen Xiaojiang, who distinguished himself last year by leading an investigation in China's northeastern Liaoning province that targeted a vote-buying scandal. More than four-fifths of the region's 619 legislators were accused of wrongdoing.

After returning to Beijing in April, Chen served as a vice minister at a corruption-fighting agency attached to China’s cabinet, the State Council, called the Ministry of Supervision.

Zhang, 59, serves as a lieutenant general in the People's Liberation Army and joined an anti-corruption unit under the party’s Central Military Commission in February. He's also a military commission member.

Xu has worked at the CCDI since 2015. But he spent much of his career in East China’s Zhejiang province before being transferred to Beijing in 2008 for a position at the State Bureau of Letters and Calls, a central government agency that processes the public petitions.

Xiao worked for Beijing's municipal government for decades before being promoted to State Council vice minister of supervision in 2015.

Four other deputies on the nine-member CCDI who served under Wang have retained their positions. The unit oversees the party's discipline inspection commission, which has 133 members.