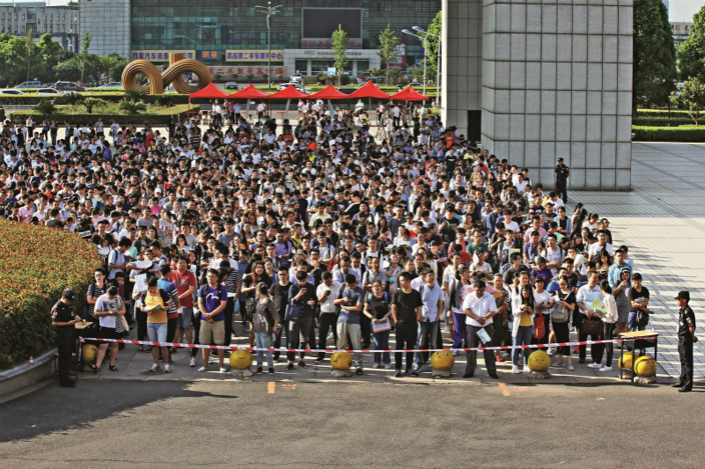 Students wait to take the national judicial entrance exam at Wujin Vocational Education Center in Changzhou, Jiangsu province, in September 2007. The most recent national judicial exam in 2017 had a record-high of 649,000 test-takers. Photo: Yang Yifan/Caixin

The results of September’s national legal profession examination are crucial for the ambitions of Li Ning, a young girl from East China’s Shandong province who wants to become a lawyer to help protect vulnerable people like her mother.

Li’s mother committed suicide eight years ago after she was detained by local officials when she complained about receiving unfair treatment from the authorities. It wasn’t until this August that a local court decided to bring to justice the three people responsible for the death of Li’s mother, after Li’s family petitioned the government for years.

While this success has cheered her, Li is anxious about her exam results as a recently announced reform plan may soon make her unqualified to take the national legal examination, essentially locking her out of the profession.

Established in 2002, the two-day, 12-hour exam is mandatory for those who want to become a lawyer, judge, prosecutor or notary in China. It is seen as one of China’s most difficult professional examinations as it requires a comprehensive knowledge of the country’s corpus of law and the ability to write well. Only around 10% of examinees pass every year.

But the exam has helped lots of people, many of whom lack a formal legal education, break into the legal profession. Ren Jianyu, a lawyer at the Chongqing Chuangguan Law Firm, passed the exam in 2015 and became a licensed lawyer earlier this year. Ren taught himself about the law after he was sentenced six years ago to 15 months in a labor camp for spreading “improper” political content online. His conviction was later overturned.

“I have been hurt by the abuse of power, but there are always people who believe in the rule of law and make efforts for it. This is why I took the exam to become a lawyer,” Ren said.

This year, a record 649,000 examinees took the exam, up from 588,000 last year. This surge in applicants has been partly fueled by the upcoming revisions to the exam system announced by the Ministry of Justice in January. The ministry has decided to revamp the examination beginning next year, saying it wants the exam to keep up with the country’s broader judicial reforms and improve the professional standards of the law profession.

One major change will be higher barriers to entry, with those without a law degree likely to be eventually barred from taking the exam. Although the final shape and timeline of the reforms hasn’t yet been decided upon, many worry that the door to a law career may soon be closed to many.

“I failed last year by four points, and this year might be my last chance,” said Li after taking the exam in Beijing.

China’s current judicial exam system has been in place since 2002, and is opened to anyone who has a university-level education and who the authorities decide has a record of good behavior.

A Justice Ministry official told Caixin that the lack of a unified legal exam had hindered the development of the profession and put it under the influence of political, administrative and local power.

“The installation of the unified judicial examination is one of the most significant achievements of China’s judicial reforms over the past two decades as it helped build up the number of legal professionals, who will be crucial for future reforms,” said Liu Sida, a legal studies professor at the University of Toronto.

Justice Ministry data show that over the past 15 years, 880,000 people have passed the exam and half of them subsequently got a job as a lawyer, judge, prosecutor or notary.

The system has been flexibly implemented, with rules occasionally being bent, such as the lowering of passing-score requirements for applicants living in remote, underserved areas. Over the past 15 years, these preferential policies helped about 150,000 people living in remote regions obtain legal qualifications, said Jia Liqun, director of the Justice Ministry’s exam department.

Although the opening of access to the law has been applauded, some argue that the low threshold for entry into the field no longer fits with the country’s legal system.

“A good lawyer is like a good doctor. Can you imagine a doctor without professional training performing surgery after simply passing an exam?” said Xu Shenjian, a law professor at the China University of Political Science and Law in Beijing. “Legal professionals deal with people’s life, property and freedom. It is unacceptable to allow someone to do this work without proper training.”

Other scholars have also called on the threshold for taking the exam to be raised, to give access only to those with a formal legal education. China’s judicial system has become much more complicated and delicate over the past two decades, making it difficult for people without professional training to fully comprehend it, said Liu from the University of Toronto.

Meanwhile, China has over 600 law schools, which train hundreds of thousands of law students every year, providing an adequate supply of talents to meet demand, said Liu. “There is no need to let those without formal law education to take part,” he said.

In 2016, about 80,000 people received law undergraduate degrees, and getting a graduate-level law job has become very competitive, according to an Education Ministry report.

Others have suggested that even with the upcoming reforms, the system remains too exam-centric and neglects important skills and subjects. The exam prioritizes memorization over analysis, and the subjects that it fails to emphasize, like international law, have long been marginalized in China, said He Weifang, a law professor at Peking University.

Several scholars interviewed by Caixin suggested China learn from countries like the U.S. and Germany and not only test applicants’ knowledge but also assess their ethics and practical skills.

In response to these longstanding concerns, the Communist Party’s Committee of Political and Legislative Affairs, the National People’s Congress and the Justice Ministry jointly issued a reform plan in January to replace the old exam with a new professional qualification test system, starting in 2018.

According to Jia, the Justice Ministry has partnered with the Supreme People’s Court and the Supreme People’s Procuratorate to draft the details of the new system, including rules about applicants’ qualifications and testing methods. Eventually, qualifications will be granted only to those with a law degree or at least three years of work experience in legal institutions, according to Jia.

The new qualification system will not only cover judges, prosecutors, lawyers and notaries, but also individuals who conduct administrative adjudications or reviews, as well as legal consultants and arbitrators, according to the reform plan.

While many are eagerly waiting to see how and when the revisions will affect potential examinees, scholars have suggested that this should not be the end of China’s reforms of the legal profession.

Sun Xiaoxia, director of the Law School at Shanghai’s Fudan University, said that legal professionals should undertake training throughout their career, and that the way in which judges and prosecutors are chosen and promoted should be made fairer.