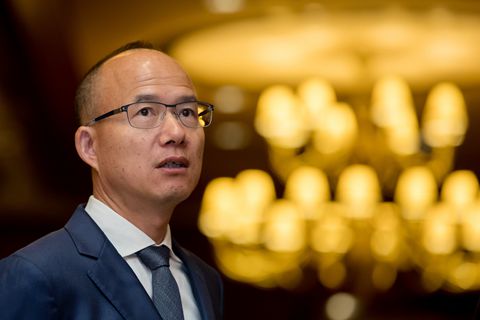 “After the change, Guo will focus more on the business of the parent company and the group’s strategy setting,” Fosun Group said in a statement. Photo: Visual China

Fosun High Technology is a wholly-owned unit of Fosun Group with businesses including steel manufacturing, pharmaceuticals, finance and real estate investment. Guo has been the chairman and legal representative since 1994.

Chen, 45, is currently executive director and co-president of Fosun Group.

Guo’s resignation from Fosun High Technology caught market attention, raising speculation that the 50-year-old billionaire may retire. As one of the five co-founders of Fosun Group, Guo ranks 22nd on the Forbes 2016 China Rich List with a net worth of $6 billion.

“I am still young and don't want to retire yet,” Guo wrote in response on his personal WeChat social media account. He also pointed out that he retains his post as chairman of Fosun Group.

“After the change, Guo will focus more on the business of the parent company and the group’s strategy setting,” the company said in the statement.

Established in 1992 as a real estate developer and pharmaceutical manufacturer, Fosun Group has grown into one of China’s largest private companies with a wide range of businesses covering real estate, financial services, mining, pharmaceuticals, retail and entertainment.