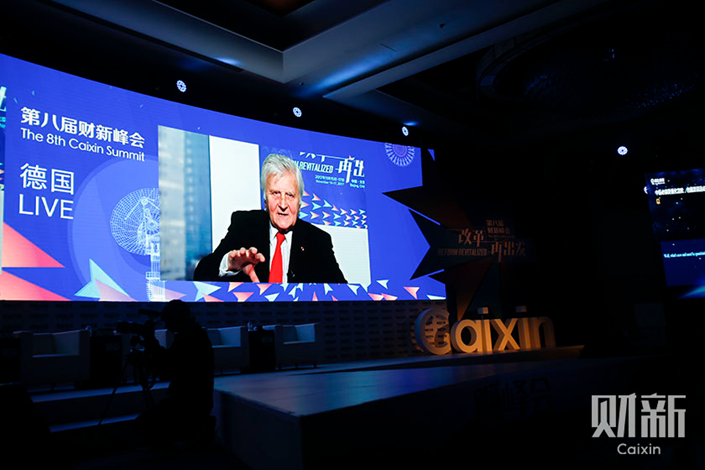 Jean-Claude Trichet, chairman of the Group of 30 and former president of the European Central Bank, speaks through satellite transmission at the 8th Caixin Summit on Wednesday. Trichet called for vigilance against excessive leverage. Photo: Caixin

A similar amount of debt to that which triggered the global financial crisis had been built up across the world over the past few years after the chaos, said Jean-Claude Trichet, chairman of the Group of 30 and a former president of the European Central Bank. Trichet spoke at the 8th Caixin Summit on Wednesday, calling for vigilance against excess leverage.

The 2008 global financial crisis was “lastly due to excess of leverage” and the deleveraging process was “very important” in helping the world economy recover from the financial meltdown, Trichet said via a video link from Frankfurt. He added that 25% of the global gross domestic product (GDP) of additional debt was added in the seven or eight years before the crisis.

“The paradox is that after the crisis, we have continued to have additional leverage” coming from both the public and private sectors and have added from 2008 to 2016 “exactly the same amount of global GDP” in credit, he said.

“I would call for vigilance and no complacency at all – we are in a situation which is still very demanding and calls for total absence of complacency,” he said.

Trichet said the importance of central banks have been recognized after the financial crisis.

In terms of better managing inflation, China could look into the possibility of lowering its inflation target to 2% to better anchor expectations, Trichet said.

It is a consensus among advanced economies including the United States, Japan, the United Kingdom and the eurozone that 2% is a good inflation rate target, he said.

“I don’t exclude that China could consider this 2% level, which is very close to what is observed today, would also be probably for anchoring expectations at quite an appropriate level,” Trichet said.