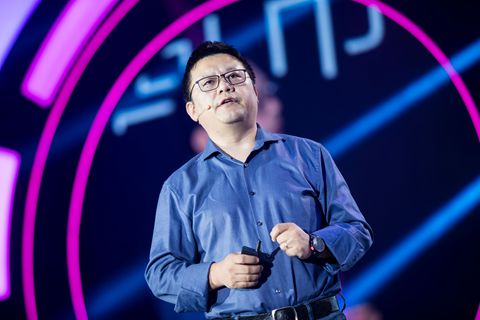 Yu Yongfu, 41, will step down Dec. 1 as chairman and chief executive officer of Alibaba’s Digital Media and Entertainment Group and assume the new position leading Alibaba’s foreign investment activities. Before he became chief of the entertainment business in October 2016, Yu held several senior positions with Alibaba following a career in investing.

“Yu has surprised us with his excellent leadership in promoting the strategy and business consolidation of the entertainment division,” Zhang said. “We believe he will give us another surprise in building the global investment system.”

The move comes as Alibaba seeks a larger share of the entertainment market. A committee of six senior Alibaba executives will manage the unit with a rotating president, Zhang said. Yang Weidong, the CEO of the video streaming platform Youku Tudou Inc., will be the first rotating president.

The statement confirmed media reports in recent days of Yu’s departure. An industry source close to the matter said Alibaba decided to reassign Yu about two months ago. The company declined Caixin’s request for comment.

He joined UCWeb in 2006 as chairman and CEO and helped the company to grow quickly. Alibaba acquired UCWeb in 2014 and in 2015 merged it with Autonavi mapping service in a revamp of Alibaba’s mobile unit, where Yu was named president.

Alibaba set up the digital media and entertainment division last year by consolidating its newly acquired assets in filmmaking, gaming, video, literature and other businesses, including Youku Tudou, Alibaba Pictures Group and Alisports. It is part of Alibaba’s effort to build a business ecosystem connecting the entertainment and content production businesses with its traditional e-commerce operations to create new competitive edge.

As a newcomer, Alibaba’s entertainment businesses faces intense competition from rivals Tencent Holdings and Baidu Inc., which have strong footholds in online entertainment. In a bid to expand its market share, Alibaba has invested heavily in the entertainment unit, especially the online ticketing service Tao Piao Piao and Youku Tudou. Yu said earlier this year that Alibaba has set no limit for funding support to these businesses.

For the second quarter this year, Alibaba’s digital media and entertainment division reported a loss of 3.4 billion yuan ($513 million), despite a 33% rise in revenue to 4.8 billion yuan, according to the company’s earnings report on Nov. 2.

In an earlier interview with Caixin, Yu said the major challenges facing the division are to effectively consolidate various businesses and bridge the content production operations with tech platforms. Yu said Alibaba’s entertainment businesses competed the first stage of consolidation as of September and entered an era of “stable rise.”