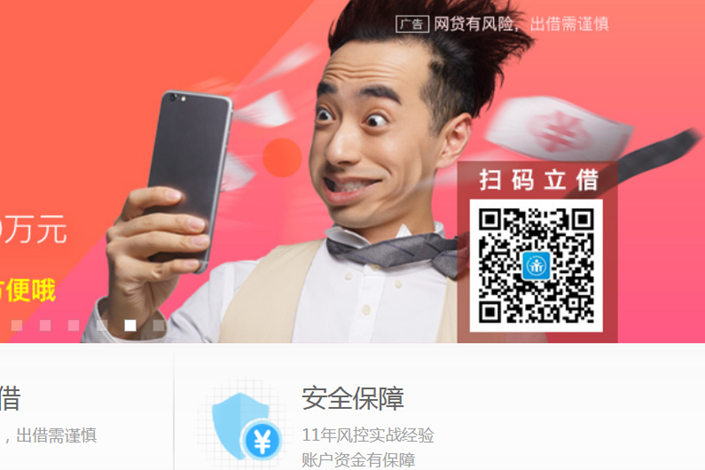 The profitability of microlenders such as Yirendai (pictured above is one of the company's advertisements) has slowed, as regulators try to rein in the sector, which is seen as creating social risks. A newspaper recently reported that a woman attempted suicide after borrowing over 700,000 yuan to buy 81 cats. Photo: Caixin

Yirendai Ltd. is following in the footsteps of another U.S.-listed Chinese microlender by posting weaker earnings, as Beijing tightens its grip on small short-term loans which are handed out without collateral.

In the three months ending Sept. 30, Yirendai’s net income was down 12% to 303 million yuan ($45.7 million) from 344.3 million yuan a year ago, the company said Wednesday. Another Chinese microlender, China Rapid Finance Ltd., earlier reported a wider net loss of $4.4 million in the third quarter. Although Qudian Inc., a larger player that listed in New York last month, recently posted a four-fold increase in its third-quarter net profit from a year ago, citing better operational efficiency and its growing borrower base.

Surging demand from borrowers without a proper credit history, such as students and small businesses, has fueled the microloan boom in China. As of late September, there were 8,610 companies offering microloans in China, and the total value of outstanding loans was 970.4 billion yuan, according to figures compiled by the central bank. That has led to a recent wave of Chinese microlenders rushing to float their shares in the U.S., tapping into growing interest from offshore investors.

However, credit risks are building up. Borrowers have been found taking out loans from microlenders to roll over previous loans, snowballing their debt. Reports of improper sales and loan-collection efforts, as well as ultra-high interest rates are also rife in the fledging sector.

Without a standardized assessment of borrowers’ risk profiles, social problems also emerge. For instance, a 24-year-old woman reportedly tried to kill herself after being unable to repay more than 700,000 yuan of microloans she borrowed to buy 81 cats, according to local newspaper the Nandu Daily.

The Chinese government has been roping in the booming sector, and analysts say that has in part slowed the growth and profitability of microlenders in the country. Investor enthusiasm for U.S.-listed Chinese microlenders has recently fizzled somewhat too, with the latest listing of Ppdai in New York pricing its shares below the indicative price range rising a mere 10% in its debut.

Among many regulatory curbs, the China Banking Regulatory Commission has told microlenders to set a borrowing limit of 200,000 yuan per user on any individual lending platform and a total limit of 1 million yuan across all platforms. But Caixin has found that only the first half of this rule has been strictly enforced so far.

In an attempt to monitor microlending risks, the central bank set up the National Internet Finance Association of China (NIFA) in early 2016, which now has over 400 members, and established a monitoring system based on information provided by over 200 organizations, including consumer finance companies and online loan providers.

But, according to people close to the NIFA, the monitoring system is still primitive, requiring lenders to manually copy information from the official website in order to conduct checks.

In fact, back in 2015, the People’s Bank of China picked eight Chinese companies — including Sesame Credit Management Co., a subsidiary of Ant Financial Services Group, and Tencent Credit Services — to begin a third-party credit-reporting pilot project. But the central bank has yet to issue any of these companies a license, saying in April that the eight companies are still “far below market demand and regulatory standards.”

On Wednesday, Yirendai said in its earnings release that it facilitated 12.19 billion yuan of loans to individual borrowers in the third quarter, all conducted online. This represents more than a doubling of loan volume from 5.62 billion yuan a year earlier.

The platform also raised 13.51 billion yuan of new funds from investors to be lent in the third quarter, but it did not give a comparison figure.

Delinquency rates were largely stable for the quarter, the company said. The default rate on loans that are overdue for 15-29 days edged higher to 0.5% from 0.4% a year ago, while the rate for loans overdue for 30-59 days remained at 0.7%.