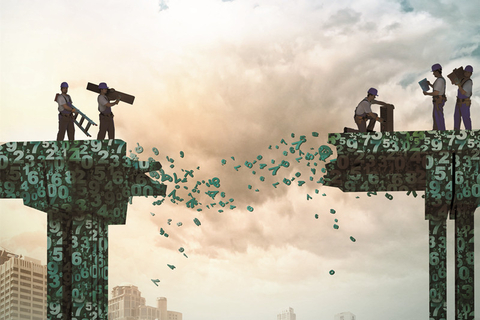 As of late September, Chinese microlenders had $146.13 billion in outstanding loans, according to figures compiled by China’s central bank. Photo: Visual China

China’s microlending sector has grown explosively in the past year — and so have the risks.

The industry targets borrowers like students and small businesses traditionally excluded from the financial system.

As of late September, there were 8,610 companies offering microloans in China, and the total value of outstanding loans was 970.4 billion yuan ($146.13 billion), according to figures compiled by the central bank.

The microloan boom has triggered a wave of lender listings, including Qudian Inc., Hexindai Inc., and Ppdai Group Inc., which have all made stock market debuts in New York in the past month.

But the low-value, no-collateral, short-term loans that these businesses thrive on have encouraged something known in Chinese as “borrowing from many sources” — individuals taking out small loans from multiple lenders simultaneously, and frequently borrowing more to pay back old debts.

Lenders, many of whom conduct business through online platforms, have difficulty distinguishing these borrowers from the rest of their customers, because many who use microlending services have no previous credit history to investigate. And those who fall behind on their payments can take advantage of the poor communication between lenders to take out loans with another business.

In 2015, the People’s Bank of China picked eight Chinese companies—including Sesame Credit Management Co., a subsidiary of Ant Financial Services Group, and Tencent Credit Services—to begin a third-party credit-reporting pilot project. But the central bank has yet to issue any of these companies a license, saying in April that the eight companies are still “far below market demand and regulatory standards.”

At the same time, the central bank’s Credit Reference Center, set up in 2006, gets 85% of its information on personal debts from traditional financial institutions like banks and insurers — institutions that rarely deal with microlenders’ main customer base.

Demand for an authoritative and unified personal credit information platform for the microlending sector is growing stronger. Personnel from multiple online microlenders told Caixin they would be willing to pay for such a platform.

Despite increasing regulation, the online personal finance sector has experienced explosive growth. The total value of microloans in eastern China, where many of the country's large cities are located, is now around 500% greater than in October 2016, according to data analyzed by the Beijing Internet Loan Industry Association.

The China Banking Regulatory Commission has told microlenders to limit each user’s borrowing to 200,000 yuan per lending platform, with a total personal limit of 1 million yuan across multiple platforms. But only the first half of this rule has been strictly enforced so far.

Intellicredit, one of the eight personal personal credit reporting agencies that participated in the central bank’s 2015 pilot, said multi-lender borrowers now account for over 80% of cash loan applicants, with more than half of these borrowers using four or more platforms.

“The number of clients hasn’t grown that much since last year, but the number of cash loan platforms is growing significantly, and the scale of lending is increasing. The newest lending platforms could be the ones to send this house of cards tumbling down,” a staffer at a Chinese online loan platform told Caixin.

Another industry insider told Caixin that, by September, many customers were already borrowing from seven to 10 lenders at a time, owing each lender as much as 10,000 yuan.

Analysts say the default risks faced by microlenders may be higher than any one company might be aware of, based on their limited pool of data.

In early 2016, the central bank set up the National Internet Finance Association of China (NIFA), which now has over 400 members, and a monitoring system based on information provided by over 200 organizations, including consumer finance companies and online loan providers.

But, according to people close to NIFA, the monitoring system is still primitive, requiring lenders to manually copy information from the official website in order to conduct checks.

In the meantime, third-party data collectors have come up with their own solutions. In August 2016, Sesame Credit, a subsidiary of Alibaba-affiliated Ant Financial, launched its internet finance risk-control products, aimed at helping businesses with credit scoring, anti-fraud checks, and accessing an industry-wide watchlist.

Sesame Credit offers companies these services in exchange for data — companies are required to offer up user data, especially on overdue loans, to Sesame Credit, which in turn uses this information to constantly fine-tune its system. “We want to be the infrastructure that everyone in the market uses,” an executive close to Sesame Credit told Caixin.

Recently-listed Qudian, which Ant Financial holds a 12% stake in, relies mainly on Sesame Credit to judge the default risk of its borrowers. Qudian is one of some 600 lenders using Sesame Credit’s system, according to a source close to Ant Financial.

Other data giants like JD Cloud and Tongdun have also launched similar partnerships with microlenders.

But these partnerships occupy a legal gray area. China’s new cybersecurity law restricts companies’ use of customers’ personal data, but a Sesame Credit staffer told Caixin that the company’s system “involves an agreement between the user, lending business, and the third party — it isn’t the sale of personal data.”

However, many of these agreements leave plenty of room for the abuse of customer data. For instance, one lender’s authorization form, seen by Caixin, tells the user the lender may also use personal information for marketing purposes, but doesn’t specify what this “marketing” could involve.

More pressing, for microlenders, is the problem of “polluted” data.

Sesame Credit’s system may be sound, but the company is still unable to control the quality of the data reported by partner lenders, a staffer at the central bank’s Credit Reference Center told Caixin. Lenders’ information often includes errors like mistaken user identity, and some lenders deliberately misprepresent user information.

According to Han Honghui, an anti-fraud expert from the Beijing Internet Finance Industry Association, some online lenders will actually put their favorite customers on their blacklist shared with other lenders, so that other platforms will reject the customer, allowing the original lender to have exclusive access to the favored customer.

Some lenders are also simply reluctant to hand over their hard-earned data for free. “We paid our own ‘blood’ for data on customers’ overdue loans,” a microlender told Caixin. “Why would we just give it to Ant Financial?”

Zhongguancun Credit Union and the Beijing Internet Finance Industry Association have also tried to set up their own information sharing platforms. But some untrustworthy members “sell the shared information to outsiders,” a source working at a personal credit company said.

Even honest lenders have a hard time contributing constructively to these platforms. A lack of standardization means lenders aren’t sure who exactly to include on their blacklists, or how they should define debt.

The China Banking Regulatory Commission is considering rules that would disincentivize lenders from offering risky loans. These rules could include caps on annualized borrowing costs and interest rates, sources said.

Chongqing municipality, which has a high concentration of microlenders, recently held a self-assessment drive for microlenders, which will be followed by on-site government inspections.

The eight third-party agencies that participated in the 2015 pilot will be part of this platform, and have each signed a preliminary agreement to buy a roughly 8% stake in the platform, according to a NIFA document seen by Caixin.