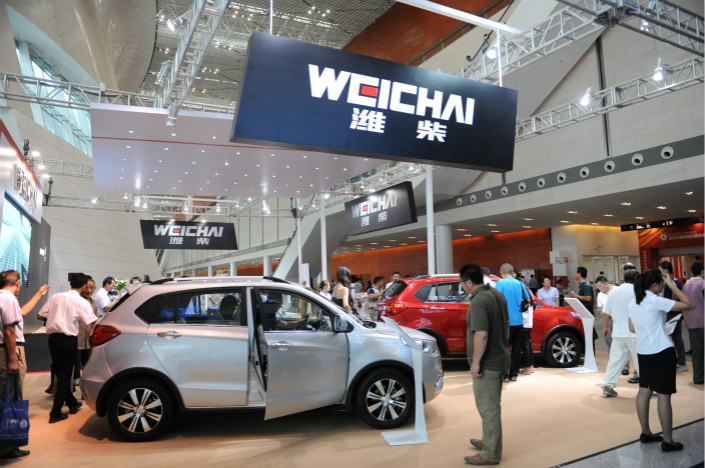 Weichai Power is a state-owned enterprise that specializes in diesel commercial vehicles. Its deal with Bosch, the world’s biggest car parts provider, comes at a time when the Chinese government is increasingly tilting toward hydrogen fuel cell cars through its subsidy programs. Photo: Visual China

Weichai Power has signed an agreement with German electronics and engineering giant Robert Bosch GmbH to develop hydrogen fuel cells and other related technology in China.

Under the strategic tie-up, the companies will also cooperate on the marketing of the fuel cell cars, the pair announced in a statement on Wednesday.

Shandong-based Weichai Power Co. Ltd. is a state-owned enterprise that specializes in the design, manufacture and sale of diesel commercial vehicles, while Bosch is the world’s biggest car parts provider.

Hydrogen cars are one type of “new-energy vehicles” — a category that also includes hybrid and electric cars — identified by the Chinese government as eligible for subsidies as part of Beijing’s efforts to clean up the country’s polluted air and develop new technologies for export.

The deal between Weichai Power and Bosch comes at a time when the Chinese government is increasingly tilting toward fuel cell cars through its subsidy programs, in which electric battery cars have long been the “favored child.”

While electric cars were given immense support as Beijing believed that the country could beat its Western competitors in the sector, the government has grown concerned that subsidies have led to “low-quality, blind expansion.”

Analysts say that the ongoing subsidies, plus the planned quota system in which automakers will have to ensure a certain proportion of their sales come from new-energy vehicles, including hydrogen cars, mean that there is a good chance hydrogen cars will take off in China, eventually.

“Development of hydrogen cars in China lags behind electric cars by at least 10 years, but that is going to change,” said He Yuntang, senior engineer at the China Automotive Technology & Research Center, a government think tank.

He also said that the cost of the fuel cell system, which is a key part of a hydrogen car, has halved since 2010.

However, even given the policy advantages, it will still be difficult to apply the developing technology to the mass market in the near future.

As of this October, less than 200 hydrogen cars were sold in China, far fewer than the 1.5 million electric vehicles that were sold.

In addition, the lack of infrastructure is also a big problem as there are only six hydrogen fuel cell refueling stations in China. Beijing and Shanghai each have just one.

“The development of hydrogen cars will first be rolled out in the form of public transportation pilot projects and will then move into mass production,” said Jin Yin from Aerospace New Long March Electric Vehicle Technology Co. Ltd., a state-owned company with a focus on aircraft and new-energy cars.