New Strokes on the Canvas 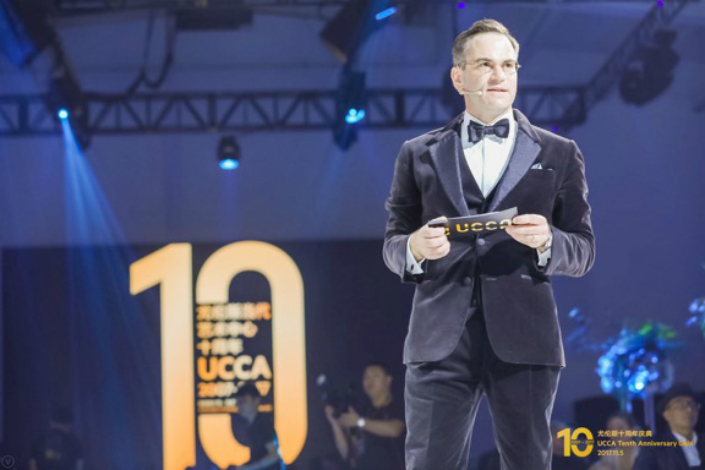 Philip Tinari, director of the Ullens Center for Contemporary Art in Beijing, speaks at the institution’s 10th anniversary gala on Nov. 5. Photo: UCCA

A stalwart of Beijing’s art scene, the Ullens Center of Contemporary Art (UCCA) was saved from closing by a billionaire benefactor last month, after the Ullens family decided to stop funding the center.

“We prepare to enter a New Era of our own,” said Philip Tinari, UCCA’s director, at the gallery’s 10th anniversary Gala on Nov. 5, referencing President Xi Jinping’s proclamation that the country has entered a new era of socialism and the founding of a UCCA nonprofit foundation for the promotion of art.

Beijing’s artistic landscape is going through a metamorphosis. A new generation of young Chinese artists, with a completely different life experiences from their predecessors, are changing the definition of Chinese art.

The increasing diversity of the art scene is experiencing some growing pains however, with Beijing-based economist and founder of the Maybe Mars record label Michael Pettis telling Caixin: “We all have stereotypes, not just foreigners but Chinese do too, about what Chinese art is supposed to be and if it doesn’t fit those stereotypes, the Chinese are often accused of merely copying being the West.”

Through these changes in the scene, Tinari has been a relative constant. In the nearly two decades since he first came to China, he has founded a website dedicated to Chinese art, co-founded and edited a magazine, and lectured on art at the China Central Academy of Fine Arts.

In an email interview, Tinari explained to Caixin how Beijing’s contemporary art canvas has changed, and where it is going.

Caixin: How has contemporary art changed in Beijing in the last decade?

Philip Tinari: A decade ago there were stirrings of international interest and signs of a healthy domestic scene beginning to take shape. A decade later the ecology of the art scene in Beijing is mature and thriving, with a wide range of institutional, commercial, educational, media and other players. Contemporary art has gone from being the province of a small circle to a vital part of the cultural life of the city

Caixin: What role does or has the UCCA played in the city’s art scene?

Tinari: UCCA is a place where a large public comes to encounter contemporary art, and through contemporary art, to make sense of China’s place in the world. We aim to present serious yet accessible exhibitions of acknowledged masters and rising talents, from around China and all over the world. And we hope to provide as many avenues as possible for our audience to engage with, and ultimately understand, the work that we show.

Caixin: What differentiates Beijing from other Chinese or East Asian cities in contemporary art?

Tinari: Beijing is a grand national capital, which draws artists and professionals from all over the country. Here you will find pockets of artists from the far Northeast, from Sichuan, from Fujian, from Guangdong, as well as the immediate region. This national pull — the idea of coming here to make a career and a life — is based on the idea that people from anywhere can be welcomed and succeed, as long as their work is original and compelling. It makes for a very vibrant and rich kind of interplay. The stakes are high.

Caixin: How is Beijing different from major European and American artistic centers?

Tinari: Despite China’s rapid development, Beijing is still comparatively lacking in art institutions. New York, London, Paris — these are cities with dozens of museums of modern and contemporary art of all sizes, with different and complementary missions and programs. While new museums emerge in China all the time, Beijing has actually lagged somewhat behind Shanghai. It still has a way to travel to reach the professional standard of some major international centers.

Tinari: There is an external perception that censorship restricts creativity and expression here. Sometimes this perception is actually true.

Tinari: A small but vital one for the moment. There is a dedicated community of foreign artists who keep studios in Beijing — people like the American painter Peter Wayne Lewis, whose exhibition we mounted at UCCA in 2016. Also quite important to the development of contemporary art in China over the years are the foreign art professionals — people like Karen Smith, Meg Maggio, Urs Meile, and the late Hans van Dijk — who have done so much to introduce the work of Chinese artists to the global art world.

Caixin: Do young Chinese artists struggle to get a platform for their work? If so, why? Do established industry players do enough to promote up and coming talent?

Tinari: There are ample platforms for young artists in China today — I feel like nearly every month I am asked to serve on a jury for one or another young artist prize. We have decided to take what we think is a more considered and sustainable approach to emerging artists with our “New Directions” series of exhibitions, which offers a platform for young Chinese artists to have a first institutional solo show at UCCA.

Caixin: Is there a clash between the established art community and the new generation of Chinese artists? Why?

Tinari: I don’t see a clash, but rather an increasingly layered and subtle scene. In the last few years, many young Chinese curators who hold degrees from art schools in New York and London come back to Beijing and open small nonprofit spaces, many of them inside the Second Ring Road. This is a new and exciting element of the scene here, and ultimately one that will make it more valuable and productive, as well as idealistic.

Caixin: What kind of new direction should we expect the UCCA to take in the near future?

Tinari: After a decade of operating mainly as maker of exhibitions, the UCCA is taking some exciting steps. The establishment of a nonprofit foundation has allowed us to begin thinking about how we can better serve the community. What kinds of programs will allow us to bring contemporary art to the largest number of people in the most meaningful possible way? Can we become a center for research as well as display? How can we better leverage digital channels to communicate more effectively with our public? These are the big questions we are asking ourselves, while staying true to our founding mission to bring China and the world together through contemporary art and culture.

Caixin: To what degree do wealthy investors play in shaping who is represented in the city’s art scene?

Tinari: In some sense, the art world is a rare example of functioning trickle-down economics. The money that collectors are willing to spend on artworks finds its way to the galleries, the artists, and ultimately to art institutions, foundations, magazines, and other corners of the scene. That said, the system works best when the public, guided by the professional community, does the job of deciding what it wants to see.