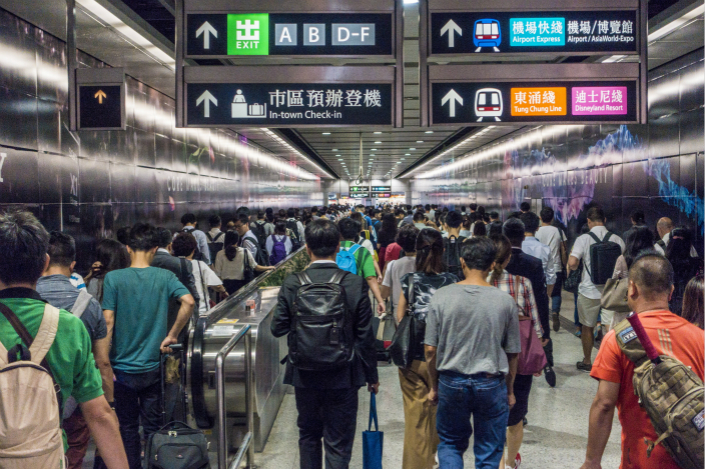 Chinese mobile payment services Alipay and WeChat Pay will soon be accepted by Hong Kong’s MTR subway system, the latest frontier in the two giants’ competition for users outside of the Chinese mainland.

WeChat was the first of the two platforms to announce an agreement with MTR Corp. Ltd., saying in a social media post Thursday that users will be able to pay for tickets with both the mainland and Hong Kong versions of the app.

This development will break the MTR wireless-payment monopoly long held by the Special Administrative Region’s iconic Octopus card — a rechargeable smart-card accepted within the city’s public transportation network and at numerous retail outlets.

Though WeChat has been accepted at some stores since 2016, this marks the first time Hong Kong’s MTR will accept such payment.

WeChat did not specify when MTR will start accepting its payment service, but an MTR representative told Caixin that the company would begin testing WeChat payment in mid-December.

On Friday — the day after WeChat’s announcement — Alipay confirmed a similar MTR agreement in a post on its official Weibo account.

WeChat and Alipay have gradually been expanding their presence in Hong Kong and abroad.

In August, over 900 7-Eleven convenience stores in Hong Kong began accepting WeChat Pay, which can also be used at retailers popular with mainland customers, such as beauty and health care chain Sasa.

In September, Alipay announced a payments joint venture with Hong Kong billionaire Li Ka-shing’s CK Hutchison Holdings. CK Hutchison owns over 600 retail outlets selling a range of products to over 6.6 million customers in Hong Kong, according to a joint statement.

Earlier in November, both WeChat and Alipay announced that Hong Kong taxis would start accepting their payment methods.