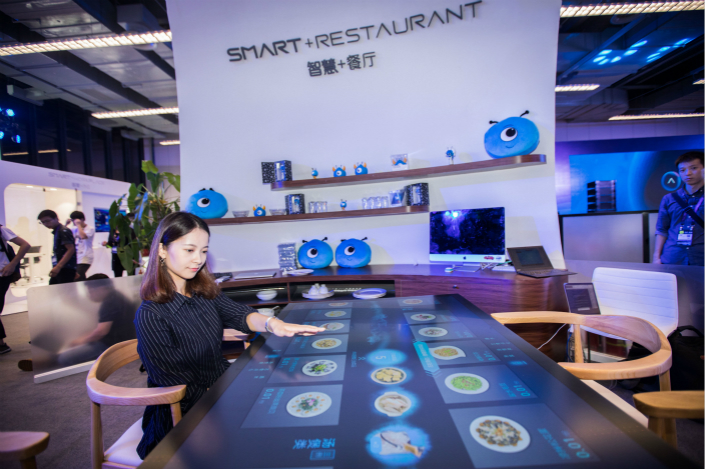 China’s restaurant industry may soon find that waiterless establishments are on the menu.

Koubei, a takeout dining and entertainment booking service provider, has developed a system that can transform a traditional restaurant into a waiterless eatery, which the company claims can help cut costs and speed up service.

The first restaurant to be equipped with this system is Wu Fang Zhai, a well-known server of “zongzi,” a delicacy made from sticky rice stuffed with filling.

The new automated Wu Fang Zhai location, in Hangzhou, Zhejiang province, is scheduled to open in January. The automation will allow the restaurant to hire 10 fewer employees than normal and stay open 24 hours a day, 12 hours longer than most of the chain’s restaurants, a Koubei spokesperson told Caixin.

Customers will place their orders, pay via smartphone app, and then collect their food.

Koubei is discussing its waiterless model with a handful of other restaurant chains, including fast food outlets and dessert cafes from both home and abroad, the spokesperson said.

Feng Xi, a Koubei product manager, said that food services should be personalized, and the goal of waiterless restaurants is not to replace workers, but to help restaurants better understand diners.

When a customer connects his or her smartphone with the Koubei automation system, it can immediately predict what they might want to eat based on their previous orders and make them recommendations, the company said in a statement.

Koubei is not the only company to get into the recent “staffless” craze, with several retailers including Alibaba, JD.com and Auchan rolling out unmanned convenience stores.

The waiterless model is the future of the restaurant industry, but currently only two processes — ordering and payment — can be automated, said Huang Xiaobin, CEO of consulting firm Bestown, who added that many fast food restaurants will be able to adopt this technology.