Growth in Steel Output, Consumption Expected to Be Flat in 2018

By Luo Guoping and Pan Che 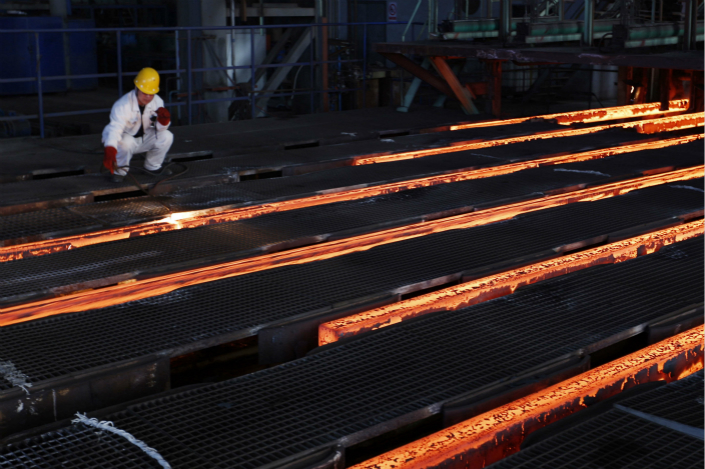 The near-zero growth represents a sharp slowdown from industry statistics for this year, when China’s crude steel production was forecast to rise 3% to 832 million tons, according to a report published Monday by the government-backed China Metallurgical Industry Planning and Research Institute (MPI). The institute forecast 2017 overall consumption will grow by an even stronger 7.7% to 725 million tons.

But the strong growth for this year was at least partly the result of a change in methodology, which saw the institute include a long-overlooked subpar steel product known as “strip steel” for the first time in 2017, MPI said.

The production slowdown comes as China continues a nationwide campaign it began last year to weed out older capacity, which included sharp reductions in strip-metal mills in the first half of this year. Some 600 such mills were shut down in the six-month period, trimming 120 million ton of capacity, according to the official Xinhua News Agency, citing industry data.

At the same time, many are expecting China’s economy, including its real estate sector, to slow in the years ahead as the government takes measures to cool the market and overhaul large state-owned enterprises.

Until now, China’s strong economic growth and overseas demand from a recovering global economy have helped to keep demand for steel from the important manufacturing industry relatively strong.

Rapid growth in China’s exports has also supported domestic steel consumption. Exports grew 11.7% in the first 10 months, with mechanical and electrical products up by an even stronger 12.4% from the same period a year ago to 7.16 trillion yuan ($1.08 trillion), accounting for 55.7% of the overall exports growth.

But many expect the real estate sector, a major steel consumer, to post little or no growth next year, following the rollout of a series of government policies aimed at cooling the overheated market.