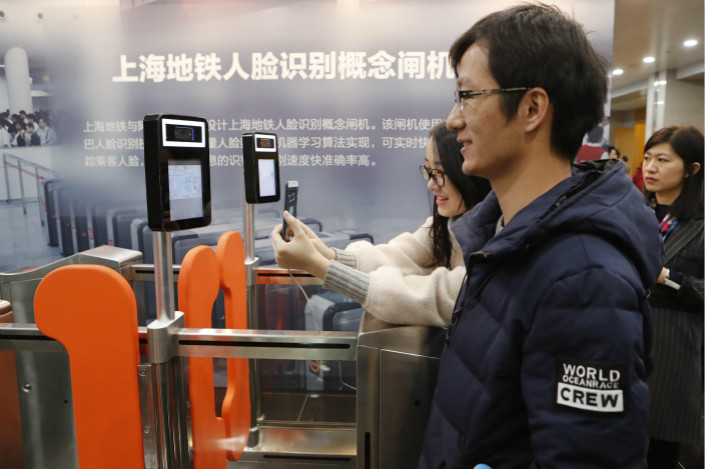 A passenger tries out facial recognition technology as he walks through a turnstile at the Shanghai subway on Tuesday during a ceremony to mark a tie-up among Alibaba, Alipay-operator Ant Financial and Shanghai Shentong Metro Group, the city’s subway operator. Photo: Visual China

The race to go ticketless at Chinese subway stations is zipping ahead with a new tie-up between the Shanghai subway operator and electronic payments giant Alipay.

The pair signed a strategic agreement on Tuesday that could ultimately make current subway cards obsolete, and will also see a number of other new high-tech bells and whistles enter China’s second most traveled subway system, after only Beijing.

The new agreement will see an Alipay payment option appear in the Shanghai Metro’s mobile app starting early next year, according to a report on the tie-up on the official news page of Alibaba Group Holding Ltd., an affiliate of Alipay parent Ant Financial.

“Once the new form of payment goes online, there will be no need for commuters to bring change to buy tickets or even carry subway cards,” the report said. “They will be able to walk in and out of subway gates with a simple swipe of their smartphone.”

The tie-up comes just weeks after Alipay rival WeChat rolled out its own similar payment option for the subway system in the southern city of Guangzhou, capital of affluent Guangdong province. That deal allowed WeChat users to pass through the system’s turnstiles by scanning checkerboard-like QR codes generated by their smartphones.

Around the same time, Alipay announced its own similar, but much smaller partnership with the operator of Shanghai’s maglev train line, which connects the city with its Pudong International Airport.

In addition to working on ticketless payments, Alipay is also working with Shanghai Shentong Metro Group on other high-tech systems to help subway passengers better navigate stations and to better manage the network’s vast system of 17 lines and 367 stations. One of those will use voice recognition technology to let passengers talk to ticket vending machines to help them locate stations close to their destination, according to the report.

The race to go ticketless in China’s subways is just one leg of a much larger competition between Alipay and WeChat, which are aggressively promoting their payment services as a substitute for cash. Both services have become hugely popular as cashless payment options at both large and small merchants throughout the country, taking advantage of scanning technology to allow people to pay for items and services using funds taken directly from their bank accounts.