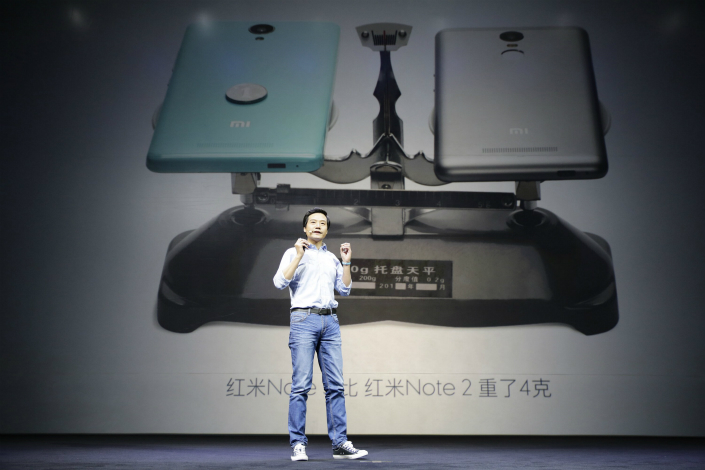 Xiaomi Inc. was dealt a setback in its effort to expand into Europe when an EU court ruled that the company couldn't use the name "Mi Pad." Above, Xiaomi founder and CEO Lei Jun speaks about his company's products at an event in Beijing. Photo: Visual China

A European Union court has agreed to Apple Inc.’s request to block Chinese rival Xiaomi Inc. from using its trademark “Mi Pad” for Xiaomi tablets sold in the EU, saying the name is too similar to the U.S. tech giant’s “iPad.”

The trademarks “are highly visually and phonetically similar,” the EU General Court in Luxembourg, the region’s second-highest court, ruled Tuesday.

In Mandarin, “Mi” is pronounced like the English word “me.” But the court said that English-speaking people are likely to read it as “my,” and thus the letter “m” is “not capable of offsetting the overall phonetic similarity.”

Non-English-speaking people, which comprise a large proportion of the EU, will tend to pronounce the letter “i” in “iPad” the same way as the “i” in “Mi Pad,” the court said.

A Xiaomi spokesperson told Caixin on Wednesday: “We (Xiaomi) are studying this matter and evaluating our options. We have no further comments at this point.” Xiaomi can still appeal to EU’s highest court, the Court of Justice.

The verdict is a setback for the Chinese tech giant, which is seeking to expand to western Europe. It debuted in the region in November by launching products that included smartphones, speakers and power banks in Spain.

Xiaomi has been trying to introduce tablet products to Europe since 2014, the same year it launched the first such device with the same screen size and resolution as the iPad Mini. The company filed an application for registration of “Mi Pad” as a trademark with the European Union Intellectual Property Office (EUIPO).

However, Apple in 2014 filed a notice of opposition to Xiaomi’s application, resulting in EUIPO’s conclusion in 2016 that the public would think the Xiaomi mark “was a variation” on the earlier, “iPad” trademark.

Xiaomi appealed the ruling to the General Court, asking it to annul EUIPO’s previous decision.

The EU verdict is the latest in a long-running battle between Apple and its Chinese rival over the latter’s attempt to register the trademark “Mi Pad” in markets worldwide. In August, Xiaomi won a similar case in Singapore after the principal assistant registrar of trademarks, Tan Mei Lin, noted that the name "Mi Pad" was independently derived from Xiaomi's own brand, The Straits Times reported.

The tablet market worldwide has been declining, recording 40 million shipments in the third quarter, down 7% from a year earlier, according to market researcher IDC. The drop in sales was due to “growing demand for smartphones combined with the lengthening replacement cycle of tablets and strengthening position of traditional PCs,” it said.

Although Apple maintained its position as the top tablet maker worldwide, with a market share of 25.8% in the third quarter, it slipped to second place behind rival Samsung in the western European market, according to IDC.

Apple also faces challenges from fast-growing smaller competitors such as Amazon.com Inc. and Huawei Technologies Co. Ltd., whose tablet shipments in the third quarter grew 69% and 40% respectively in western Europe, while the shipment of Apple’s iPad declined 2%, according to IDC.