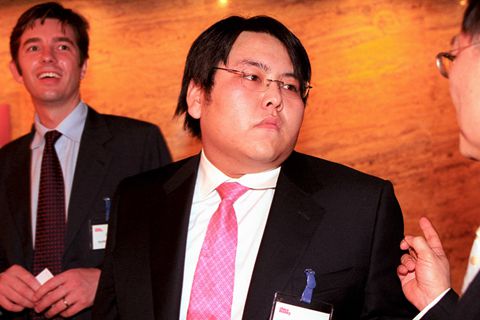 Li Zhaohui (center) was once considered one of China’s most promising entrepreneurs. Photo: Visual China

Former steel tycoon Li Zhaohui – once the richest businessman in China’s coal heartland of Shanxi province—is under court order not to leave the country over unpaid debts after the collapse of his steel empire.

Li was the chairman of Shanxi Highsee Iron and Steel Group Co. between 2003 and 2014. The company declared bankruptcy after its business slumped and its debts exploded when China’s steel sector suffered from severe overcapacity.

Li guaranteed partial repayment of a 216 million yuan ($32.6 million) loan threatened to go into default by one of Highsee’s subsidiaries. But Li doesn’t have enough personal assets to make the payment, according to a document published by the Shanghai High Court on Tuesday.

Yuncheng-based Highsee, founded by Li’s father Li Haicang in 1987, was once China’s second-largest and Shanxi’s largest privately owned steel maker. It had a combined capacity to produce more than 17 million tons of iron and steel products.

But the company was hit by a debt crisis in 2013, becoming mired in more than 25 billion yuan worth of debt. Caixin learned at the time that Highsee borrowed as much as 10 billion yuan from several banks, including the Minsheng Bank and the Industrial and Commercial Bank of China. But the company only had 7 billion yuan in assets.

According to the latest court document, Li personally guaranteed to repay one-quarter of the 216 billion yuan borrowed by Shanghai Haibo Xinhui International Trade Co. – an investment subsidiary of Highsee – from Shanxi Meijin Energy Co. in 2013.

Haibo Xinhui is no longer in business and has had its assets frozen by courts since 2014 due to the parent company’s debt troubles.

According to the document, neither Li nor Haibo Xinhui has enough assets to repay the debt to Meijin Energy. Li’s sister Li Zhaoxia, who was the chairman of Haibo Xinhui, and the company’s legal representative Zhang Yamin, were also ordered not to leave China.

Thirty-six-year old Li Zhaohui was once considered one of the country’s most promising entrepreneurs. In 2008, he was listed by the Hurun China Rich List as the wealthiest man in Shanxi with personal assets hitting 8.5 billion yuan. In 2012, Hurun Research Institute named him the third richest younger-generation tycoon, with a net worth of 12 billion yuan.

Under Li’s reign, Highsee quickly branched out from the traditional steel sector to a wide range of other businesses, including entertainment and equity investment. Li also actively invested in financial institutions, including banks, securities firms and insurance companies. He was among Minsheng Bank's top 10 biggest shareholders before selling most of his holdings in 2007, publicly available documents show.

With concerns that the collapse of Highsee could cause losses of thousands of jobs and over hundreds of millions of yuan in tax revenue, the local government set up a special team to help handle Highsee’s debt mess and push forward a restructuring plan.

But many of Highsee’s creditors have expressed concerns that they may not be able to recoup their loans as local officials tended to protect firms. Caixin learned that as of February 2016, China Development Bank (CDB) was the only creditor to get 2.5 million yuan in repayment from Highsee.