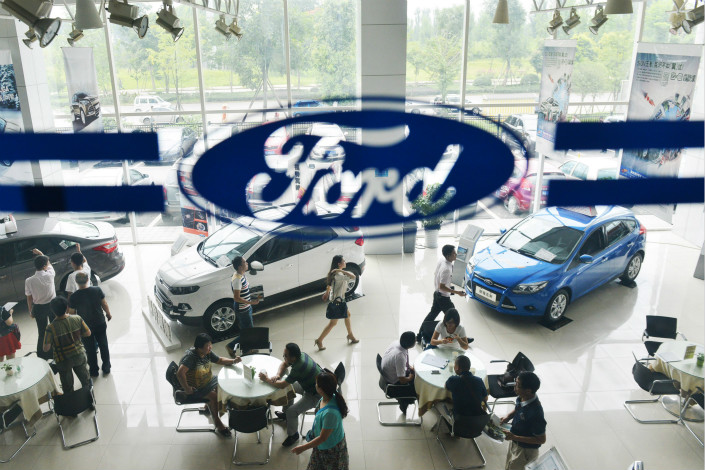 Ford is a relatively small player in China due to its late arrival, and has seen sales slow in 2017 after several years of rapid growth as it plays catch-up to more established foreign rivals. Photo: Visual China

“China is one of the world’s largest and most dynamic digital markets, thriving on innovation with customers’ online and offline experiences converging rapidly,” said Ford CEO Jim Hackett. “Collaborating with leading technology players builds on our vision for smart vehicles in a smart world to reimagine and revolutionize consumers’ mobility experiences.’’

China is the world’s largest auto market, with about 23 million vehicles sold in the first 10 months of the year. Ford is a relatively small player due to its late arrival, and has seen sales slow in 2017 after several years of rapid growth as it plays catch-up to more established foreign rivals like General Motors Co. and Volkswagen AG. As of October, Ford’s 2017 car sales were down 5% from the same period in 2016.

The new tie-up also comes as Ford revs up its new energy vehicle presence in China in step with Beijing’s aim to eventually ease out fossil fuel-powered cars. Earlier this week the company announced plans to launch 50 new vehicle models in China by 2025, including at least 15 electric cars under the Ford and Lincoln marques.

The tie-up also comes as Alibaba and other e-commerce players look for more online sales opportunities in the automotive sector. Alibaba sells cars over its various e-commerce platforms, and rival JD.com Inc. is a backer of Bitauto Holdings Ltd., which specializes in online car-related sales and services, and Bitauto’s Yixin Group Ltd., a car financing specialist that recently made an IPO in Hong Kong.