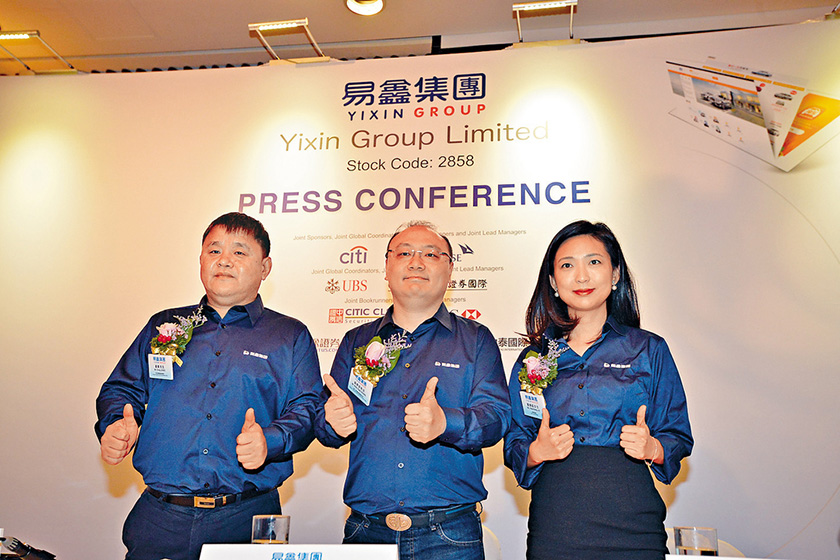 Shares of Yixin Group Ltd., which were offered at HK$7.70 apiece, opened at HK$10 and rose as high as HK$10.18 on Thursday morning before falling to HK$8.12 at the close of trading. Above, Yixin CEO Andy Zhang (middle) leads a news conference on Nov. 6. Photo: IC

(Hong Kong) — Shares of the online auto platform Yixin Group Ltd. closed 5.45% above their initial public offering (IPO) price on their first day of trading in Hong Kong on Thursday.

Its IPO, which raised $6.77 billion and was 560 times oversubscribed, is part of a recent slew of technology listings in Hong Kong that has attracted intense investor interest.

Yixin’s shares, which were offered at HK$7.70 apiece, opened at HK$10 and rose as high as HK$10.18 on Thursday morning before falling to HK$8.12 at the close of trading. The company’s market capitalization by the end of the day was HK$50.96 billion.

Yixin is China’s largest online automobile transaction platform, according to its IPO prospectus, in which the company also said it plans to use its IPO proceeds to expand its offline auto dealership network and hire more information technology specialists, among other things.

The company hopes to expand the fleet of 500,000 cars it currently manages to as many as 1.5 million “smart” cars next year, CEO Andy Zhang told reporters at a news conference on Thursday. The smart cars will come equipped with preinstalled apps, like Tencent’s QQ Music, China Literature audio books, and Baidu maps.

In addition to its platform, which connects buyers with auto dealers and finance partners, Yixin also has a business in which it offers financing services directly to customers.

The platform business accounts for around 21% of Yixin’s revenue, but is set to grow larger, Liu said.