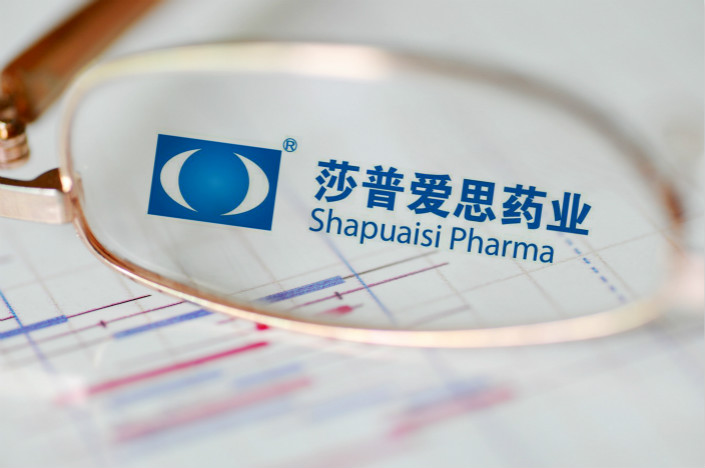 Local drug regulators and industry associations have accused Shapuaisi Pharmaceutical at least three times of running misleading advertisements over the past decade, but the national drug regulator never took action on any of the complaints. Photo: Visual China

A Chinese drugmaker’s best-selling eyedrops will have to have their effectiveness rechecked 19 years after passing their original trial due to allegations that the company overstated the product’s ability to treat cataracts.

The original efficacy trial was competed during the 1990s, when the country’s most top drug regulator was run by a notoriously corrupt official. The official was later sentenced to death for taking bribes and lowering the bar so certain drugs could win regulatory approval.

Shanghai-listed Zhejiang Shapuaisi Pharmaceutical Co. Ltd., which makes the Shapuaisi eyedrops, suspended trading of its shares Thursday, a day after the China Food and Drug Administration ordered it to redo efficacy trials, which it has three years to complete.

The company hasn’t said when its stock will resume trading.

The administration also demanded that Shapuaisi Pharmaceutical’s advertisements for the eyedrops should “be in strict accordance with what the company writes on the fact sheet for the medicine.”

The Shapuaisi eyedrops are the company’s star product. Its sales have made up more than 65% of the company’s operating revenue over the past three years.

The company has long claimed in advertisements that the eyedrops can “prevent and cure cataracts,” a condition that clouds a person’s vision and leads to blindness. It usually affects elderly people.

So far, there is no drug capable of curing cataracts and surgery is the only treatment, said Li Shaowei, an ophthalmologist with Aier Eye Hospital Group.

“Un-operated cataract remains the leading cause of blindness in low- and middle-income countries,” according to the World Health Organization.

In 1998, China’s drug regulator gave Shapuaisi Pharmaceutical approval to sell the eyedrops, a copycat of medicine developed by Italian pharmaceutical firm Angelini S.P.A. The product was initially a prescription drug. However, in 2004, the regulator allowed it to be sold over the counter after it wasn’t widely accepted by ophthalmologists.

Shapuaisi Pharmaceutical said in a statement on Monday that before the product was approved in 1998, clinical trials starting in 1994 found that the eyedrop was effective in more than 70% of cases, making it a “safe and effective drug for preventing cataracts.”

However, the trials took place when the notorious drug official Zheng Xiaoyu was in office. Zheng became China’s top drug regulator in 1994 and was removed from the post in 2005. He was sentenced to death two years later.

Local drug regulators and industry associations have accused Shapuaisi Pharmaceutical at least three times of running misleading advertisements over the past decade, but the national drug regulator never took action on any of the complaints.

The China Food and Drug Administration decided to act this time after a blogger took aim at the company for putting out questionable advertising that discouraged elderly patients, who are generally afraid of surgery, from going to the hospital for treatment, according to the blogger’s post Saturday on the social media app WeChat.

Media outlets including the official Xinhua News Agency and People’s Daily did follow-up reports on the product.

Shapuaisi Pharmaceutical invests heavily in marketing. It spent roughly the equivalent of 26% of its operating revenue from 2014 to 2016 on advertising, according to the company’s statement on Monday. By comparison, the industry average is around 10%.

The company justified its marketing budget by pointing out that that it does not have as many products as its competitors, so it has to spend more to boost the popularity of its products.