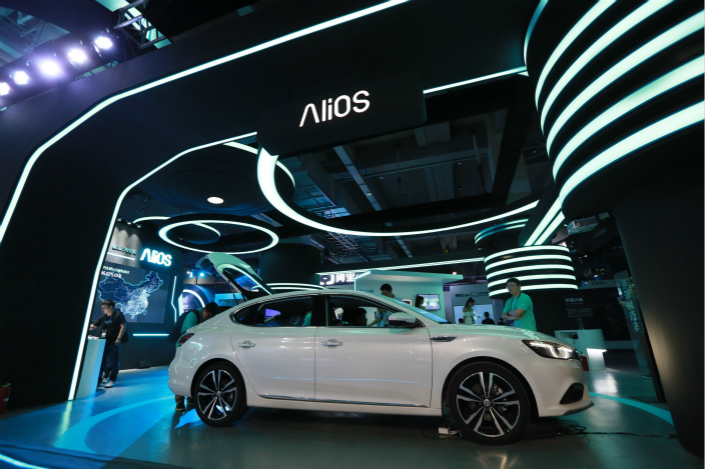 Alibaba Group Holding Ltd. has announced that it wants its AliOS software for automobiles to eventually be open source. Above, Alibaba demonstrates AliOS at its cloud conference in Hangzhou, Zhejiang province, on Oct. 11. Photo: IC

E-commerce behemoth Alibaba has proclaimed its lack of interest in producing cars and said it will focus instead on software for vehicles.

“The trend of future automobiles will be an integration of software and hardware, but that doesn’t mean it should be done by one company,” Hu Xiaoming, Alibaba Group Holding Ltd.’s senior vice president, said on Friday. “We will respect traditional automakers and have given up on the idea of getting involved in actual car production.”

Alibaba’s decision to focus on an operating system was hinted at in September when it unveiled AliOS, a rebranded and upgraded version of its original YunOS operating system.

Hu has said that his company ultimately wants to make AliOS open source and provide it to customers across all industries and professions.

Alibaba signed an agreement with Ford Motor Co. last week in which the pair agreed to explore the possibility of models under the carmaker’s Ford and Lincoln marques using AliOS in China.

Alibaba’s moves come at a time when the country’s internet giants, including Tencent Holdings Ltd. and Baidu Inc., have all rushed into the auto industry. Baidu has its own in-car system, CarNet, which provides location-based services through Baidu Maps. And Tencent has its hardware product, Lubao Box, which can offer real-time maintenance and safety information.

In April, as part of Baidu’s shift from making autonomous cars to developing driverless artificial intelligence technology, the company launched its Apollo open-source software platform for the autonomous-car industry.

However, it is still not clear whether AliOS will be successful and widely accepted, as most of the automakers who are currently interested in cooperation with Alibaba are relatively weak players and facing setbacks in China.

For example, Ford is still playing catch-up in the country compared with its more-established foreign rivals like General Motors Co. and Volkswagen AG. From January through October 2017, Ford’s car sales were down 5% from the same period in 2016.

Other automakers, like General Motors Co. and Honda Motor Co. Ltd., have their own operating systems and have shown no interest in a software cooperation with Alibaba.