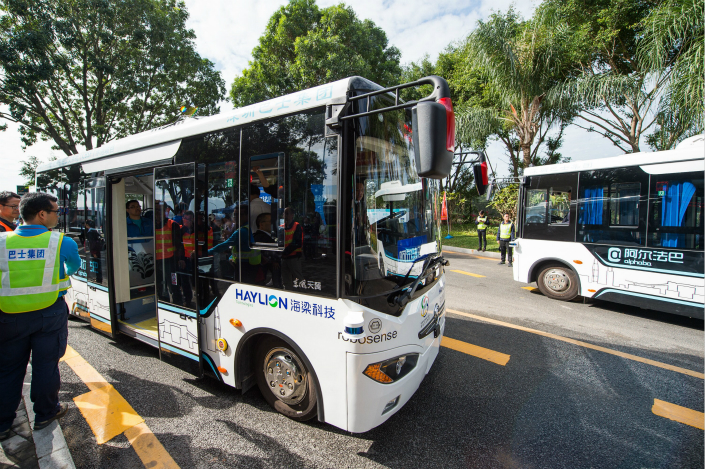 A state-owned bus company has run four buses with self-driving capabilities through a 1,200-meter (3,937-foot) predetermined route in downtown Shenzhen.

The test run marks a victory for the southern city as it seeks to burnish its image as a center of high tech in China and help drive the central government’s efforts to develop the country’s fledgling self-driving-car industry.

“Shenzhen is striving to be a leader in innovation as we continue to support the city’s public buses to join this driverless trend,” said Peng Haibin, secretary of the city’s State-Owned Assets Supervision and Administration Commission.

The purely electric buses employed an autonomous driving system developed by a local tech company, Shenzhen Haylion Technologies Co., and the state-owned Shenzhen Bus Group, according to a statement from the bus company.

Although drivers still needed to intervene in some circumstances, the buses were by and large free to drive autonomously, said a company representative surnamed Luo. The buses have the capabilities to avoid pedestrians, vehicles and barriers, as well as safely change lanes and stop at designated locations.

Local government support for driverless technology in cities such as Shenzhen mirrors national efforts to advance the industry, which the central government has identified as one that can leapfrog Western competitors.

Autonomous cars were part of the “Made in China 2025” program unveiled in 2015. The State Council, the country’s cabinet, has said it hopes to master the key technologies of the industry by 2025.

In recent years, Internet titans that include Baidu Inc., Alibaba Group Holding Ltd., Tencent Holdings Ltd. and conventional automakers have been venturing into this new frontier.

As part of Baidu’s shift from making autonomous cars to developing driverless artificial intelligence technology, the company launched its Apollo open-source software platform for the autonomous car industry in April. In August, the search engine company announced a partnership with state-owned carmaker Anhui Jianghuai Automobile aimed at launching a semi-autonomous car by the second half of 2019.

However, there are still regulatory hurdles the industry has to overcome in China, where it remains illegal to test autonomous vehicles on the country’s public roads. In Shenzhen, the test was possible only because the buses had special license plates, Luo told Caixin.

However, those restrictions could soon to be removed. In September, the Ministry of Industry and Information Technology said that it is working on regulations to give driverless car companies the green light to test vehicles on public roads.

A source close to the ministry has told Caixin that an outline of road-test rules for unmanned vehicles has been completed, though there isn’t a clear timetable for its release.