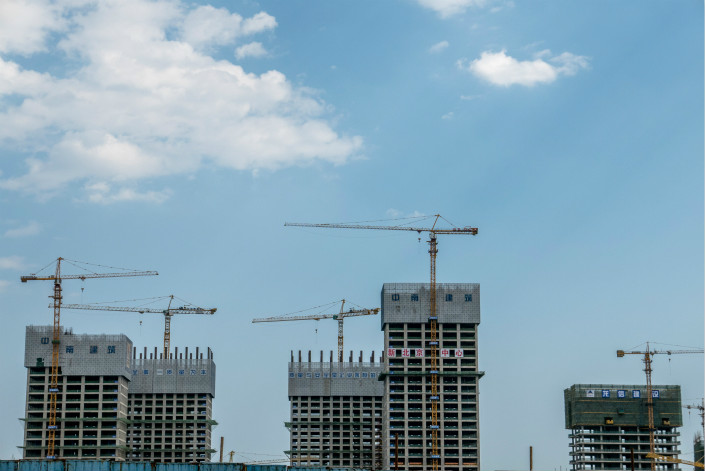 “Developers are anxious,” a real estate professional told Caixin. “Their conventional business requires them to have strong cash flow from sales. But they are now forced to become landlords which locks up huge amounts of money.” Photo: Visual China

Beijing’s housing authorities have warned property developers that they will be banned from land auctions and will have their licenses revoked if they sell housing in developments meant for the rental market.

The public caution was given after state broadcaster China Central Television (CCTV) reported last week that a property subsidiary of state-owned China Railway Construction Real Estate Group North Co. had asked potential tenants in a development in south Beijing designated for renting to make a lump-sum payment equivalent to 10 years’ rent and deposits worth 20 years’ rent.

The parent company had agreed to retain ownership of the project and rent the units out when it won the auction for the land-use rights a year ago, and the CCTV report questioned whether the developer was disguising sales as long lease contracts.

The Beijing Municipal Commission of Housing and Urban-Rural Development summoned executives from the developer to investigate the claims. Although the company had not actually collected rent in violation of the rules, the way marketing employees explained the deposit and rental information to potential tenants was “improper,” the commission said in a statement posted on its website on Monday, adding that it has ordered the company to rectify the malpractice.

It also reiterated policies announced in April which say developers will be blacklisted, barred from acquiring land in the city, and could have their real-estate development license revoked if they sell projects built for renting that they had agreed to retain ownership of when they bought the land-use rights.

The commission will “continue to enhance the management, supervision and law enforcement regarding the renting of housing projects whose ownership is meant to be retained by developers,” the statement said.

The Chinese leadership is actively promoting the rental housing market to help ease a shortage of affordable homes. Encouraging real estate developers to retain ownership of the projects they develop and rent them out is also seen as a way of sustaining investment in the property sector, a pillar industry for the economy, as the government imposes controls on the sale of residential properties to curb runaway prices.

The Beijing housing authorities published rules covering the renting of properties by developers in April. The regulations make it clear that companies must retain ownership of the project for the term of the land-use rights, usually 70 years. They also stipulate that contracts for a single tenancy cannot exceed 10 years.

In order to encourage developers to build rental housing, the Beijing government in October introduced a condition into land auctions for residential property development that when bid prices hit a pre-set ceiling, the land-use rights should be sold to the company offering to retain ownership of a greater proportion of the project.

Similar initiatives have been brought in by local governments in other cities designated by the central government as areas where rental housing should be encouraged.

A development zone in Guangzhou, the capital of South China’s Guangdong province, in September asked developers bidding for a plot of land for housing construction to retain ownership of the development for the entire 70-year term of the land-use rights and rent the apartments only to employees of industrial enterprises based in the area.

But despite the rules, some developers may be tempted to sell their projects because of pressure on their cash flow, according to analysts.

Gross average annual rental yields in major Chinese cities are 2-3%, which means the cost of buying the property is 33.3 to 50 times its annual rental income, said Guo Yi, marketing director at Yahao, a real-estate consultancy in Beijing. The yield is too low to cover the high development costs of real estate developers and so some companies may still be tempted to sell even if that is in violation of the rules, she told Caixin.

“Developers are anxious,” said Yang Hongxu, deputy director of the Shanghai-based E-house China R&D Institute, a real estate services provider. “Their conventional business requires them to have strong cash flow from sales. But they are now forced to become landlords which locks up huge amounts of money.”

There are now calls within the industry for the government to take into account the concerns of developers about the financial implications of building and holding homes for rent and to bring in financial institutions to help grow the rental market.