By Wang Zili and Wu Gang 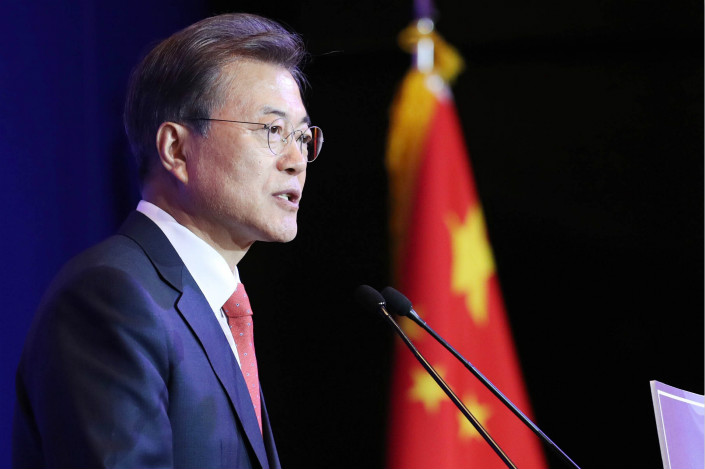 South Korean President Moon Jae-in met with South Korean and Chinese business representatives on Wednesday. He is expected to meet with Chinese President Xi Jinping on Thursday, according to South Korea’s Yonhap News Agency. Moon is pictured above at a Beijing luncheon on Wednesday. Photo: Visual China

China-South Korea ties, which have been tense since Seoul decided to deploy a U.S. anti-missile system, may not fully recover if the two sides cannot solve the dispute “thoroughly,” Chinese scholars warned in a seminar ahead of South Korean President Moon Jae-in’s ice-breaking visit to China.

Moon arrived in Beijing on Wednesday a four-day state visit, his first to China since taking office in May. He has been trying to mend relations between the two countries that soured after his predecessor, Park Geun-hye, agreed to a U.S. plan to deploy a missile defense system called Terminal High Altitude Area Defense, or THADD, in mid-2016.

Despite South Korea’s explanation that the move was a reaction to North Korea developing ballistic missiles and nuclear weapons, the Chinese government has condemned the system as a threat to its strategic security.

South Korean businesses in China have borne the brunt of the fallout between the two east Asian neighbors. South Korean retail giant Lotte Group has closed dozens of outlets in China, while carmakers Hyundai Group and Kia Motor Corp. have seen their sales nosedive.

The number of Chinese travelers to South Korea has also dwindled. According to South Korean government statistics, 3.3 million fewer Chinese holidaymakers went to the country in the first nine months of this year, reducing tourism earnings by 7.45 trillion won ($6.82 billion).

But there are signs of improvement after the two countries’ governments sought a rapport through discussions. The Chinese Foreign Ministry announced on October 31 that although China continues to oppose THAAD, it has “noticed” South Korea’s stance that it is not against a third country and won’t harm China’s strategic security. South Korean Foreign Ministry also made it clear that South Korea won’t participate in the U.S. missile defense system and that it won’t allow the further deployment of such systems. But, several missile launchers have already been deployed in South Korea by September.

In an interview with China Central Television on Monday, Moon reiterated South Korea’s goal in deploying THAAD system is to defend against the North. “South Korea will make sure not to use THAAD in any other areas than defending against North Korea’s nuclear weapons or missiles, it won’t hurt China’s security interests, and the U.S. has also repeatedly promised to commit to its words in this issue, too,” Moon said in the interview.

However, Chinese experts are doubtful whether tensions created by the missile defense system can be diffused quickly.

“China and South Korea’s dispute over THAAD has not gone away, we are just pretending that it does not exist anymore,” Li Bin, a professor of international relations at Tsinghua University and an expert in nuclear proliferation, said at the seminar in Beijing on Monday.

Wei Wei, deputy director of the Chinese People’s Institute of Foreign Affairs, said the two countries have so far only reached a temporary understanding on the THAAD issue. “If the problem is not thoroughly resolved, China-South Korea ties will not fully recover and advance further,” he told the seminar that included both Chinese and South Korean scholars.

Some South Korean experts argued that their country has no choice in the face of North Korea’s continuing weapons program, and China’s tough response has been difficult to understand.

“For decades, South Korea has given up on developing nuclear weapons by itself and chosen to take shelter under the U.S. nuclear umbrella. Now with the North and South still considering each other as enemies, what can one side do when the other speeds up the development of nuclear weapons and missiles?” said Bae Ki-chan, a consultant with South Korea’s Institute for National Strategic Studies.

Moon met with South Korean and Chinese business representatives on Wednesday. He is expected to meet with Chinese President Xi Jinping on Thursday, according to South Korea’s Yonhap News Agency.