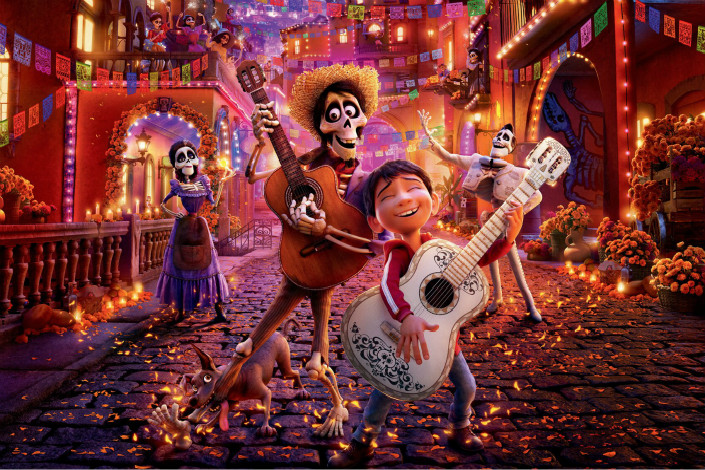 The movie’s success in China was to some degree unlikely, as the country’s film regulator — the State Administration of Press, Publication, Radio, Film and Television — often rejects stories with superstitious and supernatural elements. Photo: Visual China

Musical animation “Coco” is tugging at the heartstrings of Chinese audiences, and has smashed Pixar’s China box office record.

Although featuring relatively unfamiliar Mexican culture and Spanish-English dialogue, the film has moved viewers with its affecting take on family, dreams, life and death — including some themes that movie reviewers said mirrored ancient Chinese philosophy.

Box office receipts for “Coco” have hit 900 million yuan ($136 million) on the Chinese mainland in its three-week run, according to domestic box office tracker Maoyan. This beats the 254 million yuan brought in by 2016’s “Finding Dory,” which at the time was the Pixar film that had performed best in China.

The story revolves around the Mexican Day of the Dead, when families gather to remember those who have died. In one family, a young boy dreams of becoming a musician — against his parents’ wishes — and is transported to the land of the dead, where he meets with ancestors and sets off on an adventure of music and memory.

Rather than dismal and haunting, the underworld of the film is a colorful amusement park, where skeleton-shaped ghosts wear makeup and party like the living.

In the world of “Coco,” a ghost can die if no one in the living world remembers him or her. The setting resembles the centuries-old theories of Chinese philosophers Laozi and Zhuang Zhou, who believed that some spirits can live on after death, Li said.

The Chinese also have a culture of remembering the dead, most prominently with their Tomb-Sweeping Day, Li said, adding that this is not so much a belief in ghosts as the search for a connection with another world.

The movie’s success in China was to some degree unlikely, as the country’s film regulator — the State Administration of Press, Publication, Radio, Film and Television — often rejects stories with superstitious and supernatural elements. But censors may have been won over by its strong family elements and promotion of a “healthy and beneficial” mindset.

China has remained the top international market for “Coco,” nearly matching its home market of the U.S., where it has pulled in $138 million, according to entertainment publication Variety. The film has not yet hit screens in other major markets such as the U.K., Australia and Japan.

Distributed in China by China Film Group Corp., “Coco” was voted the best animated film at the New York Film Critics Circle Awards this year and has been nominated for Golden Globe Awards, Annie Awards and Broadcast Film Critics Association Awards. It is expected to be a leading contender for the 2018 Academy Award for Best Animated Feature Film.